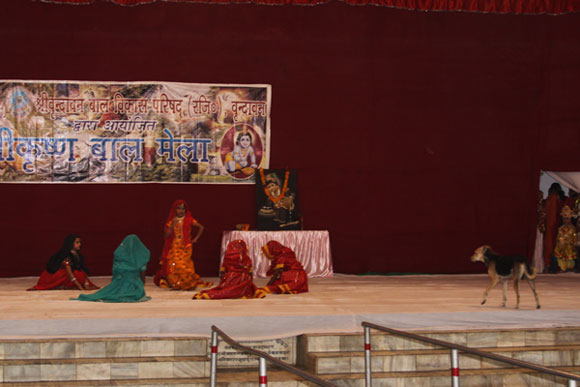 Yesterday I told that the children were at a fair for a performance. I had to laugh a lot when Ramona told me more about how it was at the fair. It made me think again about differences of culture or mentality and of these basic attitudes that we get from our parents or which we somehow develop when growing up.

Ramona said that this fair would never have taken place like this in Germany. She was surprised but also had to laugh about how it was organized. Last year the children and teachers were there in the time which was on the program but nobody else was there so that they waited for more than an hour until the program actually started. This year they started from the Ashram a bit later and it was soon their turn so that they didn’t have to wait.

The music was very loud but during some performances it sometimes just stopped. Everybody on stage was confused and had to stop in the middle of the movement. The woman who did the announcements started before the previous program was even half finished and they tested their light system including disco lights while some children were on stage in the middle of their own song. People of the organization moved on stage and in front of the performers from left to right, journalists and photographers climbed on stage to get a better view and suddenly a dog walked on stage, looking for the right place to lie down. Apart from the fact that the people of the sound never found the right song for the next performance on the first try, the announcements of who is going to perform next were a mixture of different school names and organizations.

Well, it is India. We had to laugh a lot about this and thinking of how in Germany this kind of performance has to be as perfect as possible we had to laugh even more.