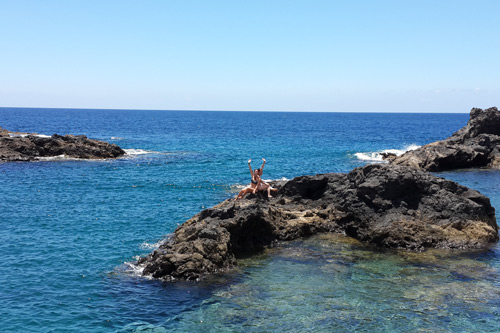 I yesterday told you about my friend with whom I unfortunately don’t feel very close anymore. I would like to give you an example of a situation in which our different beliefs, views and attitudes have created a distance in between us. It was about the question what women and girls should wear – and whether they invite rape and sexual harassment by not covering up.

My friend is a practicing Hindu believer, he is pro-culture and pro-traditions, while you most probably already know my stand on all these topics. We had a conversation on an image which had also caused me to write a blog post which you can read here. The image gave the message to men that they should teach their daughters to ‘wear full clothes’.

I vehemently objected to this thought and gave all arguments against it but obviously could not convince a person who believes in a life according to old, traditional and religious Indian culture.

After this conversation, I did not feel good at all, as I remembered a day, just a few weeks before, when I had shown my friend photos of our time in Europe. There were pictures of my, my wife, daughter and friends at the beach. We were all in swimwear with my female friends and of course also my wife in bikinis and my daughter in a swimwear for children – which just looks like colourful underpants.

If you, or anyone, believes that clothes that don’t cover the full body invite rape, if you think that women should not wear bikinis but go to the beach in full clothes, my holiday pictures will invite wrong thoughts in you! I share a holiday photo and you share an image saying women should cover their bodies?

What will you be thinking of my family, of my wife?

I think it is quite obvious and I really cannot have this feeling of closeness with someone who thinks in this way about my wife!

You all already know that I don’t hold back my thoughts and that’s how I told my friend exactly this in very clear words. His response was ‘You think too much!’

No, actually you don’t think enough! Your religion doesn’t allow you to think and that’s how you just think as much as your scriptures and your priests are telling you! God is doing his thing anyway, so why would you bother at all?

But when you make a statement, a statement of any kind, which is as general as the one that says ‘Clothes are for covering our body, not for exposing!’, you are speaking about everyone, everywhere. Your statement also applies to me, applies to my wife and applies to my daughter! If you say it doesn’t, you are lying. You won’t want to see the truth but this is what is on your mind and even though you may secretly admire the freedom that my family and friends enjoy, inside of your mind, a voice says ‘That’s wrong and sinful!’

No, I cannot feel the closeness of a really good friend in the face of such incidents. I may regret losing the feeling – but not when I think of the reason for this loss!