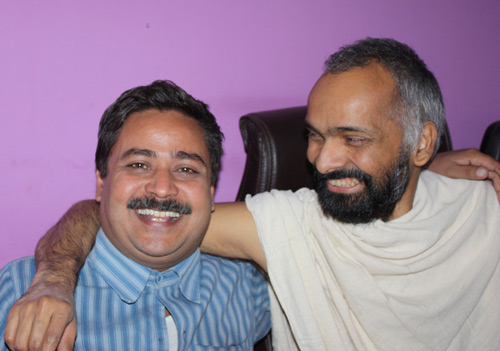 I am just getting ready to go to Agra. That is what I have been doing for the past six days. I get up, do my daily work in the morning and then take off – to go to the hospital and visit my friend Govind.

Govind is my oldest friend. We went to nursery together when we were four years old and have ever since maintained our friendship. It was thus quite a shock when he called on Purnendu’s phone last week, on Tuesday evening at around eight o’clock, telling that he had had an accident on the way home from work. He told him to please come with the car and bring him to the hospital. Of course we took off immediately – but I was already not as much worried anymore when Purnendu told that Govind had spoken on the phone himself – this meant that he was conscious and speaking. He had actually analyzed the situation himself already, telling Purnendu: ‘My leg is broken!’

He had told Purnendu where he was and we picked him up – the movement made him scream of pain – and went straight to the closest hospital. He told us that he had been thrown out of the Tempo, a popular transport vehicle in India, when it was hit by a car. When he hit the floor, it made a big ‘crack’ and he knew already that his leg was broken. The X-ray report at the hospital confirmed this: both bones of the left leg, tibia and fibula, are completely broken and at the spot where it broke, there is only powder left.

Overnight he stayed at the hospital close-by but the next morning we took him to the bigger hospital in Agra where his surgery will take place. The doctors have to wait however until the swelling goes down – and until then he is lying there, obviously with painkillers which sometimes work and sometimes are not enough, during which times he is suffering from the pain!

This is how I have been going to Agra daily in the past week. I don’t usually leave the Ashram much, so it is really very unusual for everyone here to see me leave everyday but I love doing it for my friend! It is good to give someone company in such a situation, to divert his mind, make some jokes and laugh.

It is of course not a nice situation and horrible that he had this accident. It is a fact however that it happened and now, when you have to deal with it, it is best to see the positive factors! After all, it could have been much worse!

The advantages of having him lying there in bed, off work and resting, are obvious to me: we finally get some free time to talk! Although Govind is working not too far away and we are both living in Vrindavan now, we don’t have much time to meet. He comes by at the weekends but obviously he also has a lot of other things to do and so it is sometimes a rather short visit. Now however we can talk about everything and anything because he doesn’t have to go anywhere.

Another similar benefit is that he finally gets time to read! Govind loves books and reading but normally has absolutely no time to really immerse himself in a book! Now he has these days in hospital and after that weeks of rehabilitation ahead in which he will not be able to go to work – and thus have plenty of time to just grab a book and read it from the first word to the last!

Going to Agra every day has been beneficial for me, too: Of course I already start missing Apra after just a small time out of home but it makes me realize once more how wonderful our living and working situation is! I am normally here the whole day and I can see her at any time. Whenever I want, I can get up from my desk and go to play with my baby! I am again thankful for being able to be with her so much! And of course it is not only Apra! Normally I am sitting next to Ramona the whole day, who of course misses me when I am gone – but that also means that I am welcomed with great joy when I get back home!

So you see, an accident happened, Govind is in hospital and of course there is pain and everyone wishes him to be back home soon, fit and healthy again. At the same time however you can see the positive effects of the negative things that happened, so that you can say in the end: everything is fine.