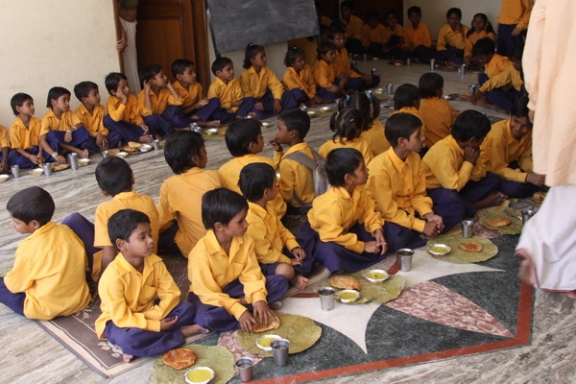 Yesterday I wrote that many people are too poor to buy their food, not only in India but also in other countries of the world while in other places people throw away food because they buy too much at once and it just gets bad. But for me it is not so much about money as it is about respect and love for your food.

I would like to ask everybody, please respect food. I said many times that your stomach is not a garbage box. You are doing something important when you are eating. Look at the food that you buy and that you cook and realize that it is very precious. It has a big value, without it you wouldn’t be able to survive. This I feel is a part of the culture that I come from. In India people worship each grain as God and they consider it as a sin to throw away food. They prefer cooking daily fresh and cooking that amount which they want to eat.

Of course I am not talking about big hotels or metropolises like Delhi and Bombay which have changed much already. I am talking about the cities and villages and the people there which are a big majority of the Indian population.

I also know many people in the west who do take care that food is not wasted. I just want to ask everybody to love and respect their food. If you see God in what you are eating, in the things that nourish your body, when food is valuable for you, then it is not only a question about money if you throw away food or not. While cooking everyone should feel that they are doing something important and everybody should be aware of this while eating, too. And then you love your food and take care that you don’t waste it.