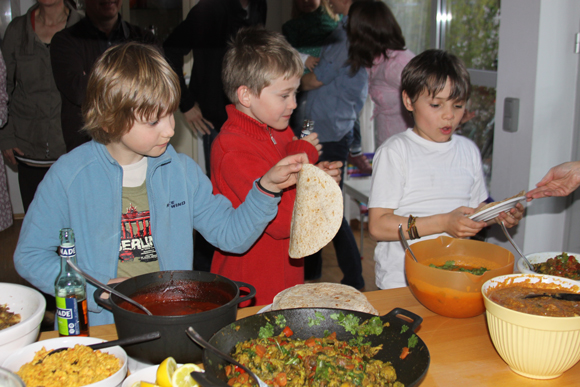 Today I had some healing sessions in the morning and after that we started preparing dinner. Yes, we started around noon to wash, peel and chop vegetables because we needed to prepare for 30 dinner guests. Antje, our friend with whom we are staying, is a film producer and has just finished a movie, a documentary, and she had invited all those people who worked together on the movie. So before we had dinner, we watched the documentary. It is a film about Indian food. Antje was in Hyderabad last year to film it and to show how Indian food culture is changing.

The small street vendors, who are sometimes supporting their whole family with their little shop, have big problems because of the ‘beautification’ plan that is being made in Hyderabad. The city should be cleaner and nicer and that is why the police often tries to make them leave their spots or has them pay high fees for staying which they cannot really afford.

What was also shown in the movie was the popularity of fast food restaurants which are now newly opening in Hyderabad. It is all those brands which are already in all major cities, in Europe and America as well as in India: McDonalds, Pizza Hut, Subway and more. Young people now think that it is fancy and cool to be at these places, especially because not everybody can afford to go and eat there.

These topics were shown in the movie, it was very interesting. We had a nice evening together with some very nice people.