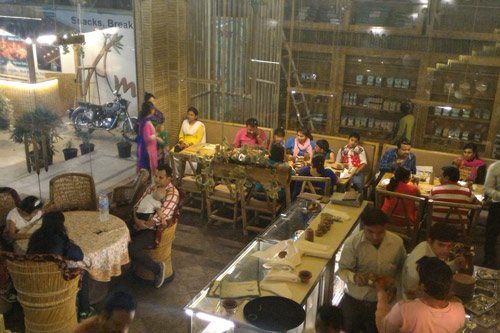 I told you that I, as well as Purnendu and Yashendu, like to talk to our restaurant guests throughout the day. Several of my friends have been interested in what kind of feedback we get from the people eating in our restaurant – and I thought I dedicate one blog entry to a more elaborate answer which can be summarized in one very short sentence as well: they love it!

Really, the overwhelming majority of people really like the food and tell us that it is one of the best meals in a restaurant they ever had! They are happy to have found such a place in Vrindavan and they really appreciate the food. One reason for that? It is different from the food one can normally find in an Indian restaurant. We usually ask people if they would like to have their food spicy or not – because usually our dishes use spices in a moderate amount and no chili at all.

Obviously, western tourists are mostly very happy about this – because regular Indian food is often too spicy for them. They like the fact that they can actually taste nuances in our food which they cannot in other restaurants.

That’s how we see it as our biggest success that local people from Vrindavan and Mathura are coming back! They tell us that it is as though they have been waiting for a place like ours! And that’s how our biggest advertisement is going by word of mouth: people come and eat here and then go and tell their families, relatives and friends about it.

A friend of ours told that he was in a wedding at the weekend and heard others talk ‘Have you been at Ammaji’s already? It’s that great new restaurant!’ Purnendu and Yashendu start experiencing a new kind of fame: ‘Hello, you are the one of Ammaji’s, aren’t you?’ We are local anyway, born and grown up here, so a lot of people know us, but it is a new role and one with which we obviously make a lot of new connections as well! So many, in fact, that it is difficult to remember everyone!

So we have really tons of great feedback! We even made it to be number one of all restaurants listed on TripAdvisor with many great reviews! There is the occasional person who would like to eat spicy and whom we forgot, in the pressure of the evening when up to thirty people are waiting for a table outside in front of our doors, to ask whether they want their meal hot. Obviously, they mention that our dishes were too mild. We listen to that, too, and apologize with the request to come again and give us another chance to prepare their meal according to their taste!

People have, however already told us in their feedback not to change our food at all. They explained that others should develop their taste accordingly – because it is healthier! Well, we are trying to satisfy everyone but of course, it would be healthier to eat mild!

With everything, we are confirmed in what we believed before we even started building the restaurant: this is what Vrindavan needs, a good place to sit, enjoy and eat a good meal. Healthy on top, in beautiful atmosphere! We are just waiting for you to join us here!