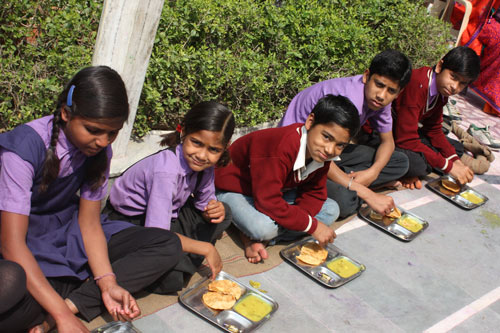 Today I just have a few statistical facts for you:

– the world’s 85 richest people have a wealth of 3.5 billion dollar, which is equal to what half of all poorest people of this world has combined!

– 791 million of these people live in developing countries

– 13.5% of the population in developing countries is malnourished

– every ninth person on this world daily goes to sleep hungry

– every year more people die of hunger than of AIDS, malaria and TB together

– 40% of India’s fruit and vegetables and 20% of its grain get wasted because of bad management of the supply chain – the food doesn’t reach consumers before it gets bad!

– 30.7% of India’s children below 5 years are underweight

– every fourth child is malnourished

– 3000 children die of malnutrition every day

These facts are sad and a terrible proof that there is still much that needs to be done in this world. If we all share from our wealth, nobody needs to die of hunger! And even if you think you cannot do much, do whatever you can. You alone won’t end world hunger – but together, we can make a difference!

You can help us feeding poor children in India by sponsoring the food for a day!

Source of statistics: Times of India