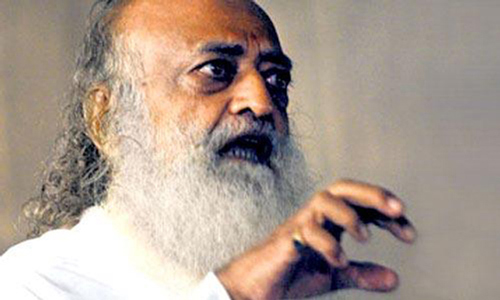 In the past week I reported about Asaram and his case of alleged sexual harassment for which he was arrested. While there are more and more details emerging, I would like to take a look on the feelings of the particular people involved, especially as this kind of case is nothing unique. It happens all the time, with many different gurus and their followers, when the latter understand that their worshipped master is not as holy and pure as they had always thought. Let’s first of all have a look at the feelings and situation of that betrayed follower.

In Asaram’s case that is the father of the 16-year-old victim. For years he has devoted his life, his love, his time, his worship and lots of money to his guru. He sent his children to his school, thinking that they would get the best education possible – and it was not cheap either! But he did it happily as he knew that the money would support his beloved guru.

And then this! His trust betrayed and broken in the worst way a father can ever think of! Can you imagine the feeling of being completely lost? Of having wasted years of devotion and all that comes with that to a man who, according to your own daughter, tried to have sex with her and even threatened her with murder? Completely disillusioned, heartbroken and at the same time angry like never before!

He did the best thing that he could do: he reported the crime to the police. Unfortunately, the police or Indian politics decided to play even further with his feelings by treating Asaram as a VIP suspect, not arresting him for nearly two weeks!

In the meantime, he received threats by followers of Asaram until he had his phones placed on police surveillance. Others tried offering him bribes and to buy him if he could stop his accusations. A woman who is close to Asaram and is considered his daughter as well as other family members came personally to beg him pardon, lying at his feet and crying that he should forgive Asaram.

He however stayed strong – and obviously so! He explained that he had given Asaram so much money but his former guru had taken something that nobody could give back! What could he offer him to pay for his crime? And why should he be afraid when he had already faced such a big hit?

No, he did not waver. On the contrary, when it looked like the police was not taking action even after the deadline of Asaram’s summon was over, he went into a hunger strike, saying he wouldn’t eat until they had arrested him, as they should do by law.

I believe he did exactly the right thing: by making the case public, unlike maybe other fathers of victims before him, he may save many more girls and maybe some more formerly blind eyes were opened!

And that is what I would suggest him to think of whenever he has that feeling of having been betrayed and having spent time, money, energy and love for a man who didn’t deserve it. You took action once you could see what is wrong and many others won’t have to face such a disappointment because you did what you did.

Don’t regret, accept what happened and take it along with you for a better future! Help others, let them come to you and tell again and again of your story so that many more may not have to face such problems!

Children – a Nuisance or Teachers of Fun, Laughter and Happiness? – 16 Sep 13

Come together to help Farmers whose Crop was completely destroyed! – 12 Apr 15