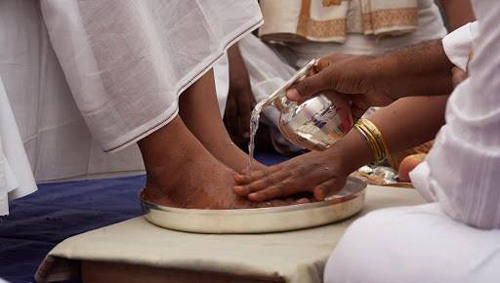 Of course even Asaram does not only have such followers who would commit any kind of crime for him without hesitating. Among his crowd of followers, too, there are those who have some doubts – but they decide to close their eyes and hang onto their beliefs. Why? Let’s have a look at their state of mind and state of feelings.

Against Asaram, there is now not only the accusation of sexual harassment but slowly more and more details emerge on similar cases and also completely unrelated crimes. The media reports for example that his Ashrams all across the country are, at least partly and in some cases completely, built on illegally occupied land. It is land that actually belongs to the government and was not meant to be sold. Some corrupt government officials however took may have accepted a bribe, a bit of money cash on the hand and they simply ignored how suddenly a whole Ashram was spreading on land that actually belonged to the government. Of course now everyone is eager to point out such problems but where were they before Asaram went to jail?

It doesn’t matter what accusation it is though, there are these followers who, to the outside, don’t talk much about it and may only deny that their guru has done something wrong but on the inside have big doubts on this statement! They see, they read, they hear the news and if they are truly honest, they believe their guru has done such a crime.

Nevertheless, they just refuse thinking any further in that direction. Their reason is actually quite understandable: they have spent years and lots of money, time, effort and feelings for this guru. They have defended him in front of relatives and friends who thought they were too devoted. If they admitted his fault, they would have to admit that they were wrong all along! It is hard to accept!

These followers want to protect their superstitious belief in a man who is like god or even above god. Obviously, he is infallible and they will try to find any kind of explanation for his misbehavior and crimes! These explanations are then used only to calm themselves and soothe their own doubts. They won’t be completely comfortable however and will try to stay out of public discussions of the matter.

They will shut their ears, stay in their illusion and just wait for the storm to pass by so that they can go on as usual.

My advice to these followers is: don’t be afraid and finally open your eyes and ears to what you actually already know inside! Your guru is no god, just as you are no god! Accept that he is just as human as you are and that he, probably in the face of popularity and wealth has done things which are not only morally wrong but also forbidden by law.

Realize that you don’t need a man like this. Take advice and help from people around you but don’t surrender your everything to anybody. Take your own responsibility and you will feel how this change in your life will actually make you stronger!