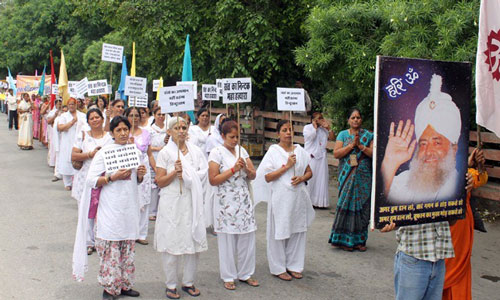 After having inspected the situation of the betrayed follower, in Asaram’s case the victim’s father, I would like to take a look at those followers who have been actively supporting Asaram in his wrong deeds and are still convinced that their guru has done nothing wrong, that this all is just a conspiracy.

These people are also full of emotions due to this case and of all emotions, anger is the very first – but while the betrayed follower is angry on his former guru, their anger is directed against the victim, her family, the media and everyone who dares saying a bad word about Asaram. They would do anything to please their master and they hate everyone who does something that displeases him.

Just take Asaram’s close aides: the media explained in detail how on events, for which the students of his schools, such as the victim, were present, Asaram would throw flowers or shine a light several times on exactly those girls whom he found pleasant to the eye. His helpers knew that these were the girls whom he wanted – and they ‘delivered’ them to him, finding excuses like that ‘special ritual’ that the victim supposedly had needed. They don’t care anymore what is wrong or right, they have allowed their wish to please their guru to overwrite any moral judgment of their own. Their guru wants it, so it is right and has to be done.

Unfortunately this is a part of Hindu religion and Indian culture that has caused a lot of trouble to many people already, because they just give up all their responsibility and follow their guru even through the worst crimes.

That’s how, when Asaram gave a statement blaming politicians for a conspiracy, when he said that Christians are trying to attack Hinduism by attacking him, when he threatened the media with violence by his followers, all of these blind sheep just followed and chimed in. They protested and are still protesting in public places against that ‘conspiracy’. They threatened and tried to bribe the victim’s family. They heard their guru say that he couldn’t guarantee that there would be no violence by his followers – and they started attacking reporters in front of Asaram’s Ashrams. On several TV channels they showed how cameramen and reporters were shouted on and beaten!

These followers were provoked by their guru to use violence simply because they blindly believe he is right and everyone who thinks the opposite is crazy, stupid or wants to harm them.

The problem is that it is very difficult to reach through to these people or talk some sense into them! Their mind is fully focused on their guru and whenever you will use just one word against him, they will feel attacked and bite back.

Is there really a way to change their mind? I believe only if they themselves experience some kind of disaster that can open their eyes in regards to their guru. They are ready to do anything for him – even if he insults or abuses them, verbally or physically, they believe he is right. It would need a big blow to shake those walls around their minds and open a gap through which some reason and sanity could enter.

Until that happens, they will keep on walking behind their guru as the blind sheep who never question or doubt whatever their master says or does.