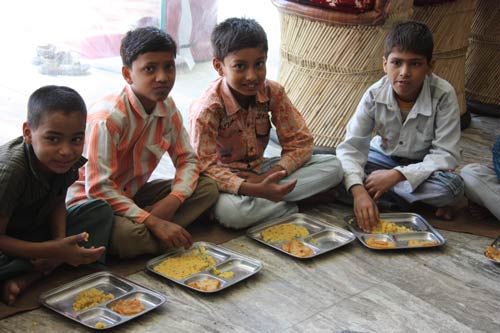 I recently saw a quotation online that I would like to write a blog post about: ‘Love is what we are born with, Fear is what we learn’. Reading these words, you first of all think ‘Yes, right, nice lines’. It does sound nice but when I thought about it, I realized the next moment that I did not actually agree with this statement.

I believe that we are born with all different kinds of emotions. We have love, of course, but we also have anger, jealousy, happiness, sadness and even fear. These all are just natural emotions and they are in us since the beginning. And it is good that they are there. Fear for example is very important for our survival. Children are afraid of heights and that is why they would not jump down from very high. So because of this fear, they don’t hurt themselves. There are several more examples that show how this fear is not negative but actually saving us from harm.

When I previously stated these thoughts, I have had feedback from religious-minded people who said that you have to make a distinction between instinct and fear. They argued that what we are born with is instinctive fear and this was something completely different.

Obviously I agree that we are not born with financial insecurity, religious fears for example of hell or sin or fear of diseases. Babies are not afraid of the punishment of God – why would they? This is something that is learnt. That is a fake and unnecessary fear that religion has taught people for ages. Children are also not afraid that the stock market could crash – this is not something we are born with. This far, this statement is right. But this does not mean that fear, the emotion, is something that we learn! Fear is not what is negative, it is a natural and very necessary emotion! It is negative to teach people to be afraid of fake dangers or of life itself. Fear is a normal part of this world.

I don’t agree with this nowadays common thought of spiritual or esoteric people that the world should be just all love without anything else. They tend to forget that some emotions that they call negative are necessary for living and developing. They have to be there, they are natural!

The idea of this quote is basically that you are born completely without fear and fear is something negative. They practically think, believe and say that fear is bad and people giving fear are bad. In all spiritual conspiracy stories, there are those people who make you feel fear and who are the bad ones. Whatever you may think of that, you should not generalize it and straight away say that fear is bad and that everybody who gives any kind of fear to anybody is bad. This would mean that parents for example are bad people because their child is afraid of scorpions – because they sting and can even kill. Or they are bad because their child is afraid of fire. To be very clear, you must say that parents gave the child this fear. With the previously mentioned mindset you would say parents are bad. I would say that the parents had to give their child this fear to prevent any harm and everything else would have been irresponsible.

Fear is seen as a negative emotion. People just don’t want to accept that this emotion is from beginning a part of them. They want to see themselves as pure at birth and then the bad surrounding, all those evil people, society and the bad, bad world taught them fear and all those other negative emotions. So you blame the whole world for this instead of just accepting that those feelings are natural. I once described the jealousy of a very small child in my diary and see this as a good example that jealousy is just natural to us.

The problem in a discussion with religious people is that they do not only think their belief is the best but they quote their scriptures as proof in their arguments and then get confused and can't believe it when somebody doesn't accept their quotations as the truth.

This quote, the sentence that this all is about, states that we were born with love and people think we were not born with any of those ‘negative emotions’ like fear, anger and hate, that they developed and were taught. But why, if you believe none of those emotions has been there from the beginning, how do you assume there is love when you are born? Couldn't that have developed, too, in the first hours or days when the mother touches and the father hugs the child?

What is the problem if all those ‘negative’ emotions are in us, too? We just need to know how to deal with them. Nobody can turn his face away from reality and deny what is there. You are born with your emotions and you have to learn how to cope with them. Once you do, it is much easier to accept your different moods, your actions and also your mistakes. Be natural!

Travelling but afraid of making Mistakes in another Culture? – 21 Nov 12

Who likes getting touched by Strangers? – 15 Apr 14