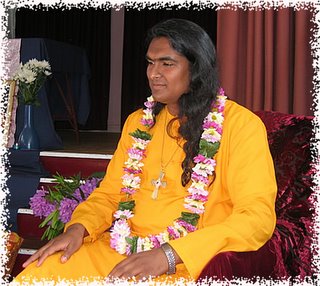 Is Swami Vishwananda responsible for separating a loving couple? – 18 May 11

Last week I got an email from a woman from Poland, asking me for help with some questions that she had on her mind. Her boyfriend broke up with her in a way that hurt her very much. It was not however another woman or a big fight in between them that brought him to this decision. It was his guru, Swami Vishwananda.

It is normal to obey the guru’s orders and this is how she asked me the following:

“My question – is it ok to set apart people if you do not know them at all? Is it not a kind of black tantra the guru is using to manipulate people? Or is it ok and it was my destiny to be away from the loved one?”

When writing, the woman was afraid that I may be friends with this Swami and that I would not be able to help her or would not even believe her. I have however made it clear on my blog several times that I am not in favour of gurus, masters and people who would like to be gurus. Whenever they, who want to be followed or also those who want to follow, read my opinion and view of things, they don’t have the wish to be in touch with me. And of course, if I hear about such gurus, their tricks and more stories, I also don’t feel like meeting them or becoming friends.

Actually I don’t know Swami Vishwananda personally. A few years ago I heard about him from one of the people who used to go to him. She showed me a golden pendant that he had materialized for her. You all know that I don’t believe in materializations and when I heard that he does this kind of tricks, I had no interest in getting to know much more about him.

So you see, I don’t really know Swami Vishwananda but I was moved by the story of this woman and got inspired by her love to write today’s diary entry. You can read her story here.

You can hear often that sect members and followers of such gurus break all bonds with their family and friends. They are told that those people who raised them, with whom they grew up and with whom they usually spend their time are not pure, not good enough, following a wrong way and disturbing their progress on their spiritual way.

The aim of the guru or sect leader is clear: he doesn’t want other people to influence this person. They could talk against him, his philosophy and his teachings. In this way the guru avoids any such kind of criticism. Otherwise how would the followers devote their whole time and life to him, the guru or the sect? There are many people who in this way just break any relation they had and just work for their guru or sect without getting paid, giving everything they have to their new master.

To answer the first question, whether it is okay to set apart people, I have to say that it is not at all okay to separate partners. We should try to bring people together, to connect them. I think this is one of the most horrible things that you can do: to create problems in between couples and in their love. So many gurus claim that they are spreading the message of love but instead they destroy relationships and hurt the hearts of relatives and partners. I would like to ask Swami Vishwananda to please help bringing two souls together.

Further I was asked whether he was doing black tantra in order to manipulate his followers. I actually don’t believe that anybody has any special powers to manipulate others. Many innocent people get afraid by strange activities that their guru or master shows them and performs. With tricks they get the trust of their followers that they have supernatural powers which can do good but also bad. Their followers think they can give them blessing but they can as well harm them. This all is fake. Please believe me, this is not true. There is no black tantra which can harm you or make you lose your willpower. These gurus use tricks to create fear and use this effect to manipulate people. In reality however they don’t have any superpower. They are manipulating but not with any great power but with their talk, their stories and tricks around rituals and ceremonies. If you don’t decide to believe them, they have no power over you.

I will finish and conclude with the answer to the last question: “is it ok and it was my destiny to be away from the loved one?” My dear, Swami Vishwananda is not the one to decide about your destiny. Nobody knows his own destiny or the destiny of another person. Our destiny is in our hands.

I wish you all the best and lots of love in your life.

15 Replies to “Is Swami Vishwananda responsible for separating a loving couple? – 18 May 11”

Love is more important than your Genes – 23 Feb 14