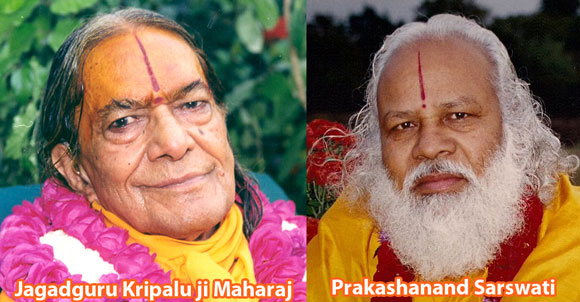 Yesterday I heard news which will be interesting for everybody who saw how many fake gurus have been exposed in the course of the last year. They have been tricking and cheating and, most disgusting of all, having sex with many different people sometimes including minors or forced intercourse and rape.

There is a guru who has recently built an enourmous temple out of white marble here in Vrindavan, spending millions of Rupees that his followers and disciples donated. Funnily enough he still has many followers although there have been court cases against him, charging him with rape in several different countries. His name is Jagadguru Kripalu and he is over eighty years old.

This is not the man whom the news was about, though. Kripalu has many disciples who all travel throughout the world, collecting money and doing the same business. The news was about one of these disciples, Prakashanand Saraswati, who seems to follow the footsteps of his guru very precisely and managed to get his passport confiscated in America. This news attracted my attention especially because both, Kripalu and his devotee Prakashanand are from Vrindavan, my hometown from where I am writing, too. Prakashanand himself has been accused of sexual indecencies with children and should have been in front of an American court in the beginning of this year because another two young women filed a case against him for groping them in the nineties. They were teenagers in that time and Prakashanand allegedly laid his hands on them indecently several times while they were in his Ashram in the south of Austin, Texas.

He was even arrested but a guru with a big pocket can also pay a one million dollar bail. A guru with disciples can even do more! When his passport was confiscated for the first time, a devotee from California pledged ten million dollars as a guarantee that the dirty guru would come back for his trial even if they gave him his passport. And the man got his passport back.

Unfortunately until now the trial could not begin as his lawyers kept on finding excuses for him. His health was too frail, he was fragile and weak after a lower back surgery in India – not too weak to travel around in the following months, visiting several festivals in India and even travelling overseas. When the judges got to know however that he even came back to the USA, giving programs and collecting money, they decided that enough was enough – they confiscated his passport again finally making it impossible for him to leave the country again before his trial.

Do you see what is happening? These are old, rich men who caught others in the illusion of an extraordinary spiritual experience, believing that they are divine. Their disciples bring them gold, money and even their daughters and sons in the belief they get great blessings. Who still thinks that these men are spiritual, enlightened or in any way better than a common man groping young girls?

11 Replies to “Kripalu and Prakashanand Involved in Sexual Abuse, Groping and Rape – 29 Oct 10”

Business of Religious Programs with a Preaching Guru – 13 Mar 11