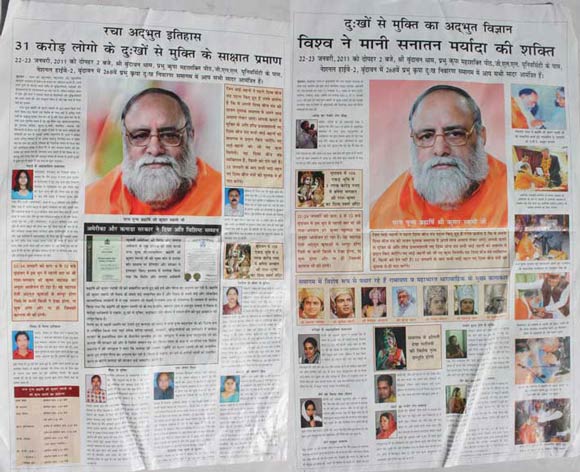 In the last week I was writing much about literacy in India and mentioned that there are more temples than schools in India. Unfortunately there are still people who like to take advantage of the religiosity of Indian people and who build more and more temples. Some weeks ago there was a big advertisement in our newspaper which attracted my attention because it had something to do with this topic and I saved it to show it to you.

It is a full page with advertisement printed on the front and on the back. It is obviously in Hindi, so I will point out the most important parts for you.

It is a two-page invitation to an event with the man in the middle, ‘Brahmrishi Kumar Swami’. The text starts by reading ’31 crore (310 Million) people are proved to have got rid of their sorrows and pain.’ And the article goes on with testimonials of different people with their pictures printed beside them.

‘I got great results in my studies’ a girl tells while another student writes ‘I was finally admitted to the institute I always wanted to go to’. ‘I was cured from cancer’ and ‘My father was very ill and was healed’ are only examples for the long list of diseases that were allegedly cured by the Swami: prostate cancer, bleeding problems of women, acne, depression, diabetes, swelling of legs, cancer that doctors had diagnosed as incurable and more, with the climax being a brain tumor that was fixed by a Mantra just before the woman died and a person who was blind and was finally healed after 4 futile surgeries.
Brahmrishi Kumar Swami claims to have healed all of them with one of his Mantras and his blessing.

On one side of the paper there are Indian people telling how he helped them, on the other side there are people of Indian origin who live overseas. With these people they printed another short article which praises his accomplishments abroad. There they say that he was even honoured by the Canadian as well as American government for his work. The American Senate and the General Assembly allegedly handed him an official certificate to honour him which was signed by the speaker of that occasion and the President of the United States of America, Barack Obama. Obama’s representative is mentioned to have given him the certificate in New Jersey.

In that certificate, which they have printed a very small picture of, it is said to be written that he is the world’s most respectable Saint, the leader of the most popular spiritual organization of the world. Billions of people got together, got healed from pain and sorrow, established a brotherhood in between them and got success in life.

Now I have been searching all over the internet to find something about all those official honours by the US and Canada government and parliament but could not find anything. Don’t you think that should be mentioned somewhere? I know there are many readers of this diary who live in America and Canada. If you have ever heard anything about this happening in your assembly or if you got to know that he gave a lecture in your senate, please let me know. I really believe the General Assembly and the Parliaments of Canada and the US have more important things to do than honouring an Indian preacher that most people of the country never heard nor cared about.

There are more pictures on that paper of different Indian politicians who take his blessings and TV artists and actors of TV series that were broadcast in the late 80s here. All these people have at some point performed in religious movies, about 15 years ago and were supposed to come to the event they invited for. I happen to know that Hema Malini, a former Bollywood heroine, now 62 years old and announced for the program brings a big group of artists and with all the setup and everything it will cost millions of rupees to invite her and other artists.

Of course people here know all those actors and they also know Kumar Swami, even if you have never heard of him. He has been on Indian TV, making his advertisement by paying spiritual TV channels to broadcast his programs. This is his and the TV channels’ way of selling spirituality.

You will be asking yourself what this all advertisement is for. They invite people to come and meet him and at this occasion donate for a temple he wants to build. On 108 acres land, he wants to create a ‘Radha Krishna Golden Temple’, a big temple out of gold which will cost 50 Trillion Rupees, about 1 Trillion US-Dollar.

I already wrote about Kripalu who has actually built a big temple in Vrindavan and has spent millions of Rupees for that. Now Kumar Swami is planning to build another temple and we read in the local newspaper that some people of Vrindavan are protesting against this plan. They don’t want another such temple to be built.

Anyway, they tell that they plan to build this temple and write an enourmous figure as a cost. Who knows if they will get all this money together anytime to build a temple like this? This advertisement however is directed especially towards poor people who don’t even know how many zeros are in this figure. People, who don’t have much and don’t know much but who have a wish for themselves. They may be ill and not have money to go to hospital but they go there, pray and give a donation with the hope to get better. Others read how famous this man is, with even Obama honouring him, and they want to see him, meet him and get his blessings. They go and give a donation.

In short, this advertisement is for collecting donations. They may never actually build the temple but they can do this all over the country and get richer and richer! How they make a fool out of poor people! From the little money that they can give, they make their business and all of this by saying that they will build a temple! If this money could be given and used for education, for building schools and paying teachers, how many children could learn and change their lives?