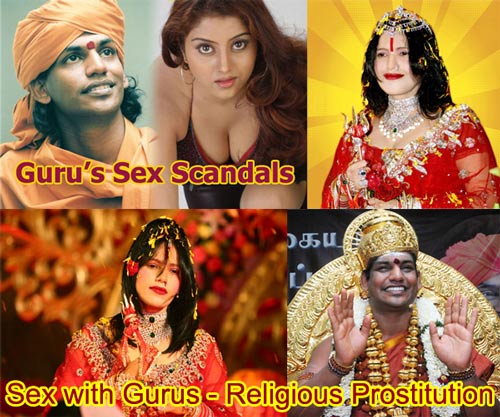 Swami Nithyananda was arrested again. He had been arrested before for being accused of rape and sexual harassment. He was out on bail and now one of his former close female disciples, who had been in his bedroom service for five years, accused him for rape and sexual harassment again. Another disciple, this one male and American, accused him for raping him, too, and harassing him sexually. He calls himself Paramahansa and he likes to sit on a golden throne, wearing big golden necklaces and a golden crown. He also loves to be surrounded by young, beautiful girls.

When I was in America in 2009, I heard of him for the first time and put a video on YouTube, criticizing and exposing him, while being among his followers. This was before he was arrested and before his sex CD appeared.

It is not only Nithyananda, another spiritual person, who calls himself Ikshadhari and who is , I believe, still in jail, was running a high-end brothel, supplying girls. Kripalu Maharaj from Vrindavan, my town, who spent Billions on building a ‘Love temple’ was accused many times of having sex with and raping female devotees. He had been arrested in India and abroad. But he is out because of his power and money and still enjoys today.

Following the steps of his guru, Kripalu’s disciple Prakashananda was accused of sexual harassment of minors and found guilty by a court in Texas. He was given a sentence of more than 20 years and then ran away. It has been more than two years that he is absconding, nobody knows where he is and he is on America’s list of most wanted persons. It was America, so he was sentenced. If it had been India, he would pay a bribe and everything would be okay. Many male and female disciples of these two gurus roam around in the country, exploiting their devotees.

Sathya Sai Baba from Bangalore, who died last year, had been popular among many politicians including chief ministers and prime ministers who regularly went to meet him. He showed lots of magic tricks on the name of miracles, produced ashes for the poor and jewelry for the rich. BBC exposed him in a documentary in which an American boy accused him of sexual harassment. The documentary is available online and worth watching. Because of his political influence, many more of his crimes have been completely brushed under the carpet.

Some years ago there was news here in Vrindavan, a report had been made in police about a preacher who had been to Kolkata and had a sexual relation with the rich wife of his host. This man wanted to get a divorce and took the chance to film them – the preacher had to run away from there.

Some time ago there was news in Vrindavan’s newspapers that the business of prostitution was running high in many Ashrams. There were police raids, many women were arrested. Selling one’s body is easy under the cover of religion and devotion.

We often hear a lot of such dirty business from the ISKCON temple. Local women are connected with this anyway but you can hear more and more often that foreign women get involved in devotional prostitution, too. It is actually very easy for a woman from another country to earn money here because newly rich, Indian men always get attracted to imported items. And here in Vrindavan you can get devotional ones for cheap. It is the same old system of demand and supply.

Have a look into the Ashrams of the religious towns Haridwar and Rishikesh and you will see that the Sadhus, Sanyasis and Gurus there are the owners of enourmous wealth and properties, they live in luxury, have residences that resemble palaces and young female disciples around them. In most Ashrams, the inner circle serving the guru consists of mostly women. Those who come to the Ashram as visitors, those who live there and the disciples around the guru, everyone knows what kind of relation these women have with their gurus. Because you cannot hide this kind of thing for long. Especially those who live around them know it. But nobody calls them wives or mistresses and these gurus show themselves as very religious, pious celibate monks. If at some point any female disciple for any reason gets out of the guru’s control, she starts exposing him, just in the way Nithyananda was exposed. Then it all comes out. How many names should I list here? I grew up in the environment of religion and spirituality and have seen from my childhood on how many big so-called Sadhus, Sanyasis, priests and preachers behave inappropriately and get into definitely sexual relations. Their followers and disciples know all about it but they remain quiet because of their influence and money.

Aren’t you surprised that while a normal middle-class person with a job or in business has to do very hard work to be able to raise his children and build a simple house, these people who do religious business, who are priests, preachers, sadhus and sanyasis, earn lots of money in a very short time and can build palaces to live in? How and from where do they get this much money and so quickly? All these young sadhus and preachers have rich women gathered around them. And I have seen many female sadhus and preachers who are in turn worshipped by rich men surrounding them. They don’t have any lack of money. See how much money these rich people spend to organize their preaching programs with lectures, bhajans and satsang. These preachers pay TV channels to broadcast their advertisement to get more programs and money from the religious audience. Tell me, is this called religion and should this be the business of gurus?

Please ask those millionaires and billionaire, those so-called sadhus and sanyasis, do they know the definition of the word ‘sanyasi’? Preaching and giving lectures is their business and especially in Vrindavan it has become the home industry. The business of selling religion, scriptures, God and blessings. It is a joke that these rich people are called sanyasi. But they don’t feel ashamed. These people are responsible for the loss of moral values in society and have harmed the image of society and the country.

With the case of Nirmal Baba everybody got to know how sellable the media is here. And it is not only Nirmal Baba, there are many more, including Kumar Swami, who are daily shown on TV programs. The media takes money from these male and female gurus and shows their news, pretending to be neutral and showing the dark side, too. In this way the gurus get their publicity and the media cannot be called partial while receiving their money, too. In the last days I saw a religious woman on TV, called Radhe Ma, wearing lots of make-up, doing a lapdance on the lap of devotees with people clapping and singing along. Is this called religion and culture?

I have heard that religious prostitution is now well established in society. So-called religious people, in religious getup, chanting God’s name, go to sleep with their devotees and earn money in this way. These devotees actually got bored from just having normal sex and now enjoy making a new fantasy reality: having sex with a religious wrapper. Devotion to God and the joy of sex – double pleasure! And which difference does it make to those devotees if they spend some money on those male and female gurus? If they went to a nightclub, they would also spend money. Last year Ikshadhari was caught running a brothel but many male and female gurus are involved in the same business. Where are our moral values, where is this society going? Is this our great India?

What I really feel bad about is that there are many men and women who go with an innocent, religious intention to those male and female gurus. The gurus don’t have good intentions for them, either, and those people who are around the gurus, who work for them and know about the bad character of the guru, think they also came with bad intentions, although many of them came with innocent hearts. Don’t you think it is now time to outcast these so-called religious businesspeople? Save yourself and your children, the coming generation, from the robbery that is happening in temples and Ashrams. Don’t waste your valuable time on programs organized on the name of religion and save yourself from other people’s bad intention and blame. If you really want to serve God and devote yourself, why don’t you do this at your home? Why do you run after these corrupt male and female gurus, wasting your time and hard-earned money? Did you ever think why all these sadhus, sanyasis and gurus in India have these enourmous amounts of wealth when a normal person is struggling to fill his stomach?

I live in the religious town of Vrindavan where this religious business is growing everywhere. And when you read my words, you can imagine how angry all those sadhus and preachers are with me. If they could, they would kill me. I have written many articles about those many popular people and organizations named above, exposing them with the result that they are angry. They abused me, wrote bad things about me, tried to bribe me, threatened me and told they would file lawsuits but I continued then and I will continue in future. I do not have any personal problem with any individual person or organization but with this corrupt system on the name of religion and God. I took their name openly and talked against them, that is why they tried whatever they could. These people are big criminals and if tomorrow anything happens to me or my family, these people will be responsible for that. I am actually not anymore a religious person and I believe that religious provides the room for all these dirty crimes. But I want to request even those who believe in religion and want this corruption and dirt to be removed from religion, please don’t be shy to spread the word about these bad, corrupt people.

Why do Indians have so many Expectations on their Women? – 23 Apr 13

Experience of Life brought our Ashram Boys back – 2 Sep 16