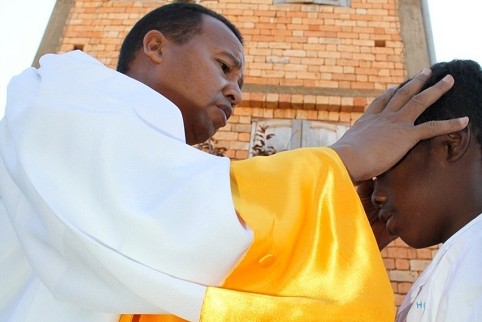 Last week Regina showed us an article in their local newspaper which she thought could be interesting for us. And it was! The article, written by Christian Putsch, was about a priest and founder of a church on Madagascar. His name is André Mailhol and he gained this space in the newspaper with the idea to build the biggest temple of Madagascar – with a helipad on top for the helicopters he is going to buy. Yes, this is interesting because it seems just like another one of those gurus, this time Christian, earning a lot of money with other people’s belief.

It is a crazy situation: Madagascar is a country maybe known for political instability but mostly for its poverty. People are hungry, children starving, many are ill and don’t have access to medical help and children have to work to support their families. 500000 of these poor people nevertheless give ten percent of their income to their guru André Mailhol, a former street seller who had the idea to found a religious community, a church called ‘Apokalypsy’. He is the head, the guru and sees nothing wrong in driving around in luxury cars. A Porsche and a Hummer jeep are displayed on a picture in the article and Mailhol is quoted ‘People should see what they can achieve with their belief in God’.

He is now planning to buy helicopters to get quicker from one side of the country to the other. And of course, in order to land them somewhere, he wants to build a big temple for 6.3 Million Dollars. It shall be the third biggest temple of the world and the biggest of his country.

When I heard all this – because the article was in German and Ramona translated it to me – I was stunned. He seems to me like a Christian Kumar Swami! He, too, promises healing miracles to those who follow and he, too, has the wish and ego to build such an enourmous temple. And he, too, seems to earn money for his projects from those who anyway have only very little for themselves.

You see, it does not matter which religion and it does not matter which country, there are people with ego who can use and misuse others through their belief. Poor people have hopes for a better life. They believe in those gurus, they believe in those masters and they willingly give money to support them with the wish that by this they can somehow improve their lives. The gurus shamelessly exploit them, drive luxury cars, live in wealth and abundance and choose to ignore the poverty surrounding them. It is horrible to see but it happens everywhere. Where poverty is widespread, people believe more in religions. They are uneducated but they have hopes and dreams, based on God. These gurus take advantage of their dreams and suck the little money that they have out of them.

It is still a long way but I hope that with the spreading of education people will also start believing in themselves instead of following such charlatans. When there is nobody anymore to follow, these gurus will become less and people will not be cheated on the name of religion anymore.

Photo and inspiration by Christian Putsch

Getting intimate with Travellers of other Countries – fine as long there is no Cheating! – 22 Dec 13