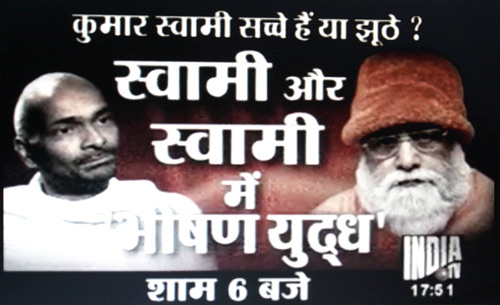 If you have read my diary in the last days, you have read about my interview exposing Kumar Swami, the diary entry I wrote about him in 2011 and the abusive language he used for me on a live TV interview that millions of people watched all over the world. We decided not to leave this but to take proper legal action. Some people advised me to just leave the whole topic now. Some of his followers accused me that I am doing this only for popularity and money and use abusive language against me themselves, even much more insulting than him.

I know that he is very popular, much more than I am and that is the reason why I cannot just leave it as it is – he, a person so many people know, has said this in front of a camera broadcasting everywhere. If I did not take legal action now, everybody would think what he said was right! I have to present the truth and this is why I went to meet our lawyer. I am not as popular as he is but people do know me and my family, too, especially here in Vrindavan. We are not as rich as he is but we do have a reputation.

As I said in the TV interview, I really do not have any personal issue with Kumar Swami. I write against people who in my opinion fool the public by presenting themselves as Gods and about corrupt religious practices. I have written about many other people like Kripalu, Nithyananda, Prakashananda or Nirmal Baba and many of their disciples have become angry with me and write insults on websites and blogs. Kumar Swami however took this to a personal level and insulted me personally. This is why we do not have any other option that taking legal action.

After a meeting with our lawyer, I want to present you the result, the official legal notice written by our lawyer, including the exact wording of Kumar Swami’s insults. The original is in Hindi, of course, and you can download it here. We did our best however to translate it into English so that you can read it here:

Under instruction and on behalf of our client Swami Balendu, I do hereby serve upon you, the opposing party, with the following notice:

Do something different than mainstream Media – spread good News! – 8 Jan 15

The Life of the average Western Mother – 17 Apr 13