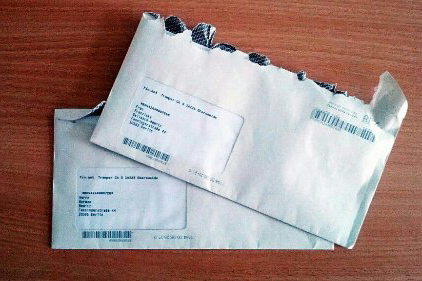 I wanted to tell you about a strange letter we recently received. The sender was which made Ramona look twice at the letter when Purnendu gave it to her: the financial department of Germany! The next thing she looked at was obviously to whom it was addressed: a woman we had never heard of!

Well, we did something which I am not very sure you are actually supposed to do but which I believe every person would instinctively do: we opened the letter. We found that it was a final reminder for the addressed lady to pay her tax, otherwise the money would be taken from her account! The date on the letter had already passed two weeks ago, showing that it had taken some time to reach here. Additionally, the address was only resembling ours, as though it had been written with hand and the person entering it into the computer could not properly read the letters.

It had arrived here though and we didn’t know what to do about it. The first thing we did was to check our database of visitors and recipients of our newsletter whether there was any woman with this name. Negative, not one.

Ramona finally called the number of the financial department given at the top of the letter and told them that they obviously had a wrong address. They thanked her and assured her that we wouldn't get any more letters.

For us, however, it was still quite surprising: who would give our address to the financial department in order to avoid having to pay? And who thinks that this will actually work?

Everybody could practically do that: cancel your residence and tell everyone including the financial department that you are emigrating to another country. You will not receive any more letters to your previous address and I guess you could go anywhere else and nobody would find you – would they?

Oh, no, actually thinking about it, I don't think it is that easy! There will always be a trace and the necessity to register yourself, to use your passport, real name or anything else! If you are not planning to start illegally faking documents and creating another identity altogether, I would suggest not going down that path!

Are you in financial trouble? Don't start cheating, it will just make everything worse. Admit it, find places where you can get help and try to work your way out of it in any way! I know people who have done it, who have come out of incredibly difficult situations – so why shouldn't you be able to do that, too?