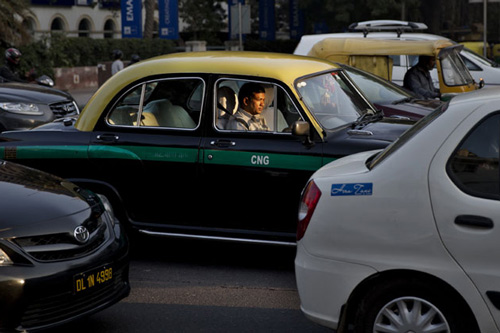 About two weeks ago, one of our guests made an experience which was not something I would wish on any other visitor of India. Unfortunately, it happens – even though I have to say not only in India but pretty much every other big and touristic town around the world: our friend was cheated by a taxi driver at the airport.

In fact, that is in general nothing new. There have been warnings of scams like that in travel guides for years. The books would tell every reader to take a pre-paid taxi at the airport where the rates are clearly stated and fixed and where you don’t hand the money to the driver but pay at the airport. In this way, you can be sure that the driver drops you where you wanted to go.

That was necessary because there were many cases of fraudulent taxi drivers who would take passengers, then drive them around in circles in Delhi and ask them for more money as it was ‘so far’.

Not too long ago, a visitor who had only come by for a meal told us how she was cheated: She had arrived in the middle of the night and provided an address for a hotel in Jaipur to a taxi driver outside the airport. The driver drove her through dark backstreets to a travel agent who explained that it was impossible for them to take her from the normal road! There allegedly were strikes and the road had been blocked – so she would have to pay the equivalent of 300 Euro to go there! That’s more than three times as much as it should cost, if not more! She got in anyway, as she had no idea that it was a fraud – but she already regretted having paid so much!

So either you have an idea of how much your trip should cost, you get a safe pre-paid taxi or you ask your hotel to pick you up! That’s what we offer as well: we will pick you up at the airport.

In our recent case however, the cheaters were quick. It was actually me waiting at the airport, as I had had business in Delhi and then went to pick up our next guest. Just that she didn’t come and two hours later, I drove home anyway. We reached at the Ashram at about the same time and we got to know the following: before our guest could find me, she was approached by a man who had maybe heard her asking others for our car to Vrindavan. He told her that ‘the Ashram’ car had broken down on the way and he had been sent instead to pick her up!

So this man drove her around Delhi for hours, then stopped at an ATM machine for her to get money out, as he insisted that she had to pay him, and only then drove her to Vrindavan, put her in a rickshaw there and then had her brought to our Ashram.

You can imagine how relieved our new friend was when she finally reached the Ashram. She had not thought of calling us to confirm the man’s story before she got into his car.

My reason for writing this blog post is not to make you afraid of coming to India. There are always good and bad people everywhere around the world. I want to make you aware however that these things can happen and to stay safe. Organize a pick-up or get a pre-paid taxi. Keep a phone number ready and don’t hesitate to ask others for a phone if you are in any doubt.