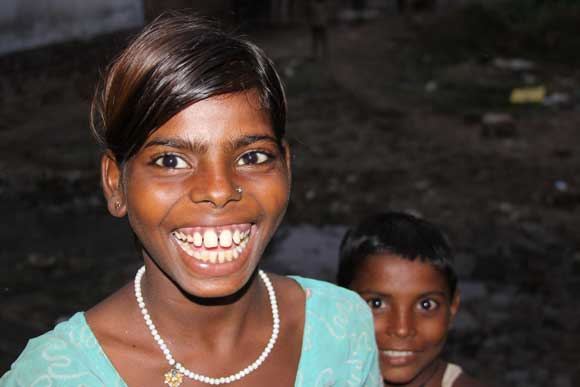 We have been talking for a while among us and also with our friends Thomas and Iris about how people reacted to the flood here. We again noticed that there are differences from here to western countries and of course these are cultural differences, attitudes that vary because of the way how you grew up, how people think and talk around you and how your parents told you to deal with problems.

When we went in the flooded area for the first time, the water was still increasing, people did not even know how bad it would be. However nobody panicked. They were just there, looking at the road and debating whether it would rise or not. The parents agreed to send their boys to the Ashram, happy that they would be taken care of. They may have worried but definitely not panicked.

When the flood was on its peak, we went there to distribute food and found a remarkably high number of people still living in the area and again, relatively calm. There were of course some women who were crying when they saw that their houses were flowing away in the water however the majority of people just watched. They were sitting on their roofs and when you listened you could hear how they calmly discussed about how far it will rise and if they would have to move fully out of the area. They realized the tragedy but they accepted it.

Every attitude has its good and its bad aspects. When discussing, we assumed that Germans would have been far more excited, sad and angry about what was happening if it had been their homes. I have experienced this, a pipe breaks and water starts filling a basement room, something that can happen and which is under your control. People panic. You can empty the basement room still on the same day, you have someone to call for help and you finally even have an insurance for your damage but you are shouting, crying, running around and are simply in panic because of this small mistake or accident.

In this case here, people have to watch without being able to do anything how the river, something uncontrollable, enters their homes. The water takes whatever they had, everything they have built in their lives and they do not know even what an insurance is that could give you anything of the value back. They do not have any possibility to do anything about it but they do not panic.

It is good, we did not have a mass panic and people were still very reasonable and we could talk with them and discuss in which way we could help them. They are fine although their whole life’s earning is gone with the water of the river. It is amazing if you see the difference in reaction. But I would say, these things are things that you cannot change. Accept them. If you are calm, you have a possibility to think about what you can do which you do not have when you get panic. You cannot change it, now water is there and you have to deal with it. Be there, don’t panic, think about what has to be done and the situation will get better.