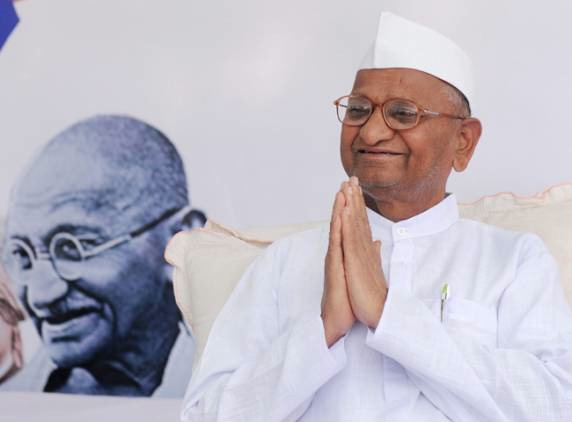 Today I actually wanted to write about the benefits of sex education for girls but I heard important news about a fight against corruption in India.

Last month, when I was still in India, my friend Govind visited me and we happened to talk about corruption. He said a very interesting thing: In older times you had to give a bribe if you wanted to get something illegal done, for example getting a birth certificate for another date than your actual birth. Now the situation is that bad that you have to pay a bribe anyway if you want to get anything done, no matter what it is. For getting a birth certificate you have to go to the same office twenty times and bribe ten different people before you have that in hand what is legally yours. If any file has to move from here to there, if you need a document or if you need them to do something, you need to pay. There are things that should not cost you one rupee extra and on which you have a right but for which you need to spend thousands of rupees, simply because of this corruption.

The whole government sector is corrupt from the lowest to the highest point. It actually starts at a very high level, where ministers are corrupt and take high bribes until the lowest level clerk, who is determined not to move even his small finger if he doesn’t get money in his own pocket.

Now people had enough. In the whole history of earth, whenever revolution took place, it was when people had enough and their anger was building up against the regime. Look at what happened in Egypt and Libya! The ruling parties were dictators but a big and basic problem was corruption! In India we have a democracy, but what kind of democracy is it when the present ruling party allegedly bought votes to be in power?

We may not have dictators but the government is just as corrupt! Daily new scams are discovered in which billions of rupees went into private pockets and high political leaders are accused of collecting this money in their Swiss bank accounts.

The social activist Anna Hazare is now doing a ‘fast unto death’ and hundreds of people have joined him in his fast. Their goal is for the government to approve an anti-corruption law, the so-called ‘Jan Lokpal’ bill. With this law in force, there would be an independent body that would prosecute corrupt politicians, bring them in front of court within a year and have a judgement and sentence within two years of the accusation. Indians from all over the country are giving Hazare moral support.

Enough is enough. Unfortunately this all reminds of the time, when Mahatma Gandhi did his fast for the freedom of the Indian Nation from the British. What kind of democracy do we have? This is the government that we have elected! They don’t listen to what people want. We only wish to have a clean government and they keep on denying this right! The government already agreed to form such an official body but they want to put government officials in the committee and one of their ministers on top. How should that work? You are saying that you want the Mafia boss to judge the crimes of the Mafia! This suggestion is ridiculous! It shows that the government does not really want to remove corruption. Otherwise what would be their argument against it? There has to be a strict law so that corruption can be punished quickly. Right now there are so many cases that are just pending and don’t come in front of a judge until the accused minister dies. It is a corrupt government and they don’t want to pass a bill against corruption.

In an independent, democratic India we have to fight for this! Has Mahatma Gandhi fought and taken India back from the British only for this?

This is why Anna Hazare now gets support from so many sides, as Indians wish to get their rights without having to bribe anybody for it.

Arranged Marriage or Love? A Generation in between Tradition and Freedom – 31 Oct 12

The right Way to criticize someone – 9 Jan 12