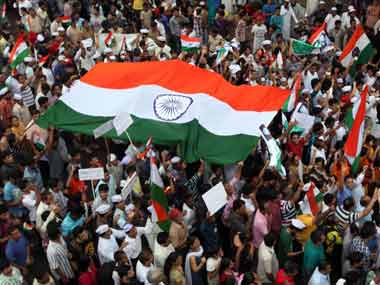 In India, the movement against corruption has not stopped. Anna Hazare is now out of jail and has continued his fast on the biggest space available for such occasions in Delhi, on the Ramleela Maidan. Still thousands of supporters are there, showing that they want to end corruption in our country.

But of course, not everybody is of the same opinion and so I could read many articles that are not only in favour of Anna Hazare and his Jan Lokpal Bill. On the contrary, there are many authors who list a big amount of arguments against his suggestion. Obviously some of those articles are sponsored by the government or supporters of the Congress party but many are not. Today I want to address those people who write against Anna Hazare’s movement.

I want to make it straight away clear that I don’t accuse you of being in favour of the Congress or the government and I also don’t say that you are in favour of corruption just because you write against Hazare’s bill. I can see that many of your points are valid, good arguments that strongly show that there have to be some changes in his proposal, too.

Anna Hazare has become the front face of this movement but what is really behind it is the wish of having a corruption-free India. We have seen corruption in our country for far too long and now is the opportunity for us to do something against it. Those who use insulting language against Anna Hazare should really feel ashamed. This is not the culture of our country. He is an elderly person who deserves your respect, also if you don’t agree with his point of view. In his age he is fighting and not for himself but for the youth of India and for a better future for them!

So stop talking against this one honest man and think whether you should not rather write against all those corrupt politicians in our government!

I see the there are many who only oppose him and this movement in order to oppose him and for no other reason. They see that the general public and the big crowd is with Anna Hazare and they want to be different than the crowd. They oppose him to stand out themselves. Others don’t have the energy to do anything themselves and if someone else acts and does something, they are immediately against it.

Some oppose this movement and say this crowd is only like sheep, running behind the rest of people without knowing what they are fighting against. Who writes like this believes himself to be very intellectual and the youth of India rather stupid. If you say this, you insult millions of young people and their feelings. They are against corruption and they know it. They may not know each point of the bill and they don’t care who wrote the proposals but they know they are against corruption!

Supporters of the congress party are now opposing the movement, simply because they see it directed against their party. It is not however, it is against corruption! Come out of thinking in parties, it doesn’t matter which political allegiance you have, you can fight corruption! In this point we all and people of all parties have to stand together. I don’t see this as a political question. I support the fight against corruption, not any party. I don’t mind the BJP supporting his movement and it is fine for me to see them sitting in the middle of the supporters although I don’t support the BJP. In the same way I want to say to people who support the Congress, realize that this is a fight against corruption!

Of course corruption will not stop because of one law but it needs a change of mindset. This fight brings awareness to our youth and starts this change. It makes them understand that they can say no to corruption. It makes them get up for their right and that is great. It is not about politics or parties. They fight to have a country where they don’t need to pay bribes in every single office and to every person of whom they need official work done. This is why we need to stand united now to fight against corruption which is deep in the system of our country.

Photo: Mumbai took to the streets on Sunday in support of Anna Hazare. Shashank Parade / PTI

Having Fun on the beautiful Island Gran Canaria – 25 Jun 14

Apra with her German grandparents in Augsburg – 13 May 16