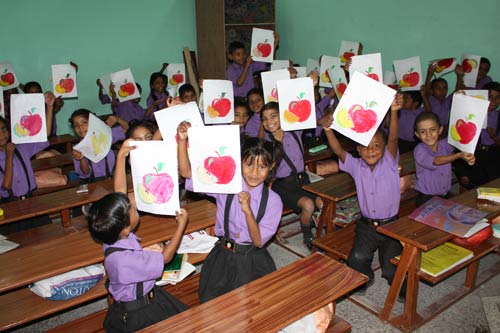 Yesterday, on Mahatma Gandhi’s birthday, I shortly mentioned his non-violent approach to make a change. He believed that a change can be made without any violent acts. Unfortunately Gandhi’s idea of change without violence has not reached Indian schools.

In fact, the opposite is the case. A recent report shows that in 99% of India’s schools physical punishment is still exercised. A very common opinion among teachers and also parents is that this is necessary for children to improve in school and most of all to get better manners and discipline. The consequence, in the theory, is that children once they are adult, thank their teachers for beating them because this is how they finally learned in school.

The real result looks different: if you just take one of last week’s newspapers, you will read that a teacher in Jammu, in North India, beat a student of 9th grade into the belly. The boy is in hospital with an injured kidney. Pick up another newspaper and you read about a 10th grade student in Haryana who did not know the answer to a question. The teacher struck him with a stick 40 times. Again, the child is now in hospital and the teacher is absconding.

In India such things happen all the time. Teachers beat children, a teacher cuts the ears of children with blades, children come home with bruises and injuries, have to go to hospital and sometimes even die. There is a law against corporal punishment – but it has obviously not been implemented.

As I have told before in my blog, I have personally experienced physical punishment in school and I remember several teachers who just enjoyed beating children and searched for an excuse to punish them. I am still today angry and I can very clearly say that I never felt thankfulness. Not then and not now.

It does not stop with beating children, though. I have seen with my own eyes how teachers use the excuse of hitting for touching girls. Today I would call it sexual harassment and maybe it gives some kind of sexual satisfaction to sick minds. Let me describe one such scene. We were sitting on the floor learning, the teacher next to a girl. When the girl made a mistake, the teacher pinched the girl so hard in her thigh that she screamed. This did not only happen once. Whenever I think of this scene now, I hate the memory, wishing I would have done something against it. But I was just a child, too.

No, corporal punishment has to stop, there is no question. It is never right to be violent towards children. They are small and weaker than you, so you hit them because they cannot hit you back. You want to make them afraid of you, the bigger one. I believe hitting children will make them less fearful. They will accept it and just think ‘What else can happen? I will just get beaten once or twice more.’ This was exactly the attitude of those children in my school who were beaten frequently!

Such old and barbaric ways are not acceptable in today’s society. That is why in many countries of the world corporal punishment is banned and there are new approaches to teach children in a non-violent atmosphere. Those countries have very good education standards without beating a single child! But in our country, the country of Mahatma Gandhi, whom the world sees as an example of non-violence, the law is of no use, it is not being implemented.

We are positive however that there will be a change and we actively do something to start this process of change! In our primary school we have implemented the law and taught our teachers how to teach without physical punishment. In the past five years we had to fire three teachers for this reason. There are other ways to show children that they are doing wrong without making them hate school. I believe children have to like their school and we have created such a place and such an atmosphere where children like to come every day. Without violence.