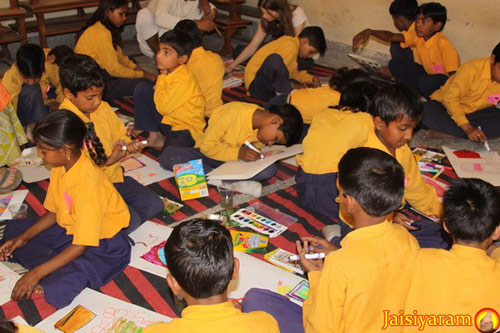 In my long blog entry of Friday, in which we exposed a school in our town for cruelly hitting their students, I mentioned that non-violence was one of the reasons for us to open our school. I was asked what exactly I meant by that. Well, it’s quite simple: we wanted to support children but not in a school where they would be beaten!

We had started many years before the opening of our school with supporting the education of the poor. First of all, we had boys at the Ashram who had come from different parts of India to Vrindavan in order to study Sanskrit. We provided them food and education for free and later on, when we were asked for help, we also paid their fees. Finally, we started giving classes at the Ashram ourselves. We paid the region’s best Sanskrit teacher and my sister taught English.

I was travelling a lot in that time but once, when I was home, a local person approached me and asked whether I would like to help some children whose parents have trouble paying the fees of their primary school. My family and I were happy to help! By 2006, we sponsored up to 160 children in other schools in Vrindavan, paying their school fees, their uniforms, books and stationery. On my travels, I kept telling people about it who then also helped by becoming child sponsors!

We visited these schools from time to time, especially when we had guests at the Ashram who had donated for these children. With each visit, however, no matter how nice it was, I had one problem: the stick which I saw leaning at the wall behind the teacher. I had talks with the teachers and with the principal and heard different answers: ‘Stick? Which stick? We use that like a ruler for the blackboard…’, ‘Oh no, the stick is only there to make the children afraid, not to hit!’ and ‘We will never again hit a child, we promise!’ The last one was said after we threatened to send all children whom we support to another school – but they didn’t keep their promise.

It all didn’t help, I knew that the children whom we were supporting there, were being hit in class. It didn’t feel right: we wanted to give them a good future, we wanted to make them learn and have fun instead of going to work. The last thing we wanted was for them to be afraid and to be harmed or hurt. What good would it bring? We knew it would damage their minds, maybe more than their education would help them.

There was no way to influence the administration enough however – they would lie straight into our faces because they were convinced that corporal punishment was necessary for bringing discipline and fear. And fear, in their eyes, was necessary for children to learn. That’s how we had to start our own school if we wanted to ensure non-violence for the children we helped.