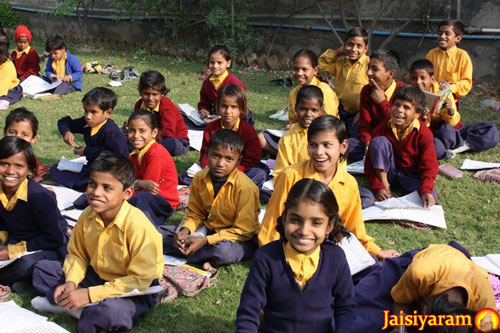 Yesterday I explained you how corporal punishment was a big reason for us to open our own school. We knew that we would only have enough influence on the teachers not to hit children if we were ourselves the administration of the school. Of course, however, there was still effort involved and it was a process to reach the point that we are at now.

So we knew that it is the administration, the principle, the manager, the top people of a school who decide how the school’s students are treated by the teachers. They are the ones who advise how to deal with students. This did not mean however that our teachers automatically followed our idea, agreed with our thoughts or knew how to teach a class without the violence they had been used to practice in their previous schools!

In fact, the general mindset of most people here, including teachers, is that an occasional slap in the face or stroke on the fingers is necessary for children to learn. This is what they learn at home, this is how parents act with their very small children already. This is what children get to know when they go to school and finally there is nobody who tells them otherwise during their studies either. How should they know that there is another way?

We told them. Oh yes, we were probably the very first people for a whole lot of teachers over the course of the years who said such a thing to them. You are not allowed to hit children. Not with a stick, not with a ruler, not with your hands. Don’t make them stand in uncomfortable positions or for extended periods of time. Don’t send them out of the classroom.

For my western readers, most of these will seem just natural because this is what they have experienced in their own school time. Here, however, teachers listen to this, then look at you and ask you ‘So what am I supposed to do if they don’t behave?’

We have actually had to fire several teachers over the course of the years, especially in the beginning, for doing exactly these things they were not supposed to do. It is not difficult to get to know about it: there are enough children who tell about it and the teachers themselves mostly did not deny what they had done – because they didn’t think it was very wrong. But it meant them having to leave from here immediately. Even one slap, which is nothing unusual in other schools, resulted in us having to search for a new teacher. Finally however, the new teachers got to know by the old ones that we were really strict about it.

We still got the questions though: ‘What should I do if a child doesn’t do his or her work?’

And so we started teaching them the basics. You have to treat children with the same respect that you want to get. Talk to them with love. Don’t scream. Focus on their achievements instead of their faults. Give them a chance to explain their bad behavior. Encourage them. Play with the children, make any lesson more interesting by showing examples out of nature or anything that they can touch, see, experience. Make experiments with them and don’t see them as ‘just children’ but as people, human beings, the next generation.

We support our teachers in every way we can to ensure they know the right way, that they have options for creating a loving atmosphere in which it is fun to learn. This is what I believe is missing, apart from a change in the mindset: trainings for teachers to do it differently. To do it right.

We are proud of what we have come and where we have reached. Today we can say for sure that in our school, no child receives any kind of corporal punishment.