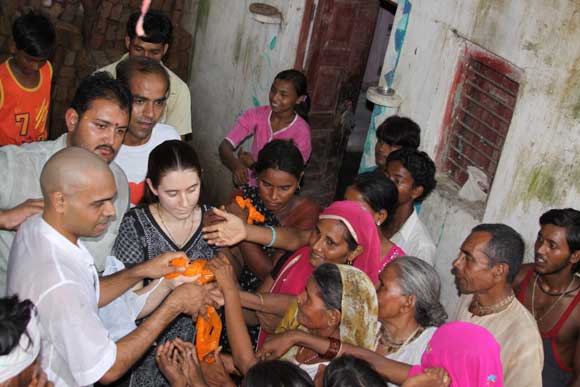 Our friends, the family vom Kolke from Germany sponsored today’s food as they regularly do. We did not only invite children however but also people who are affected by the flood. Among these families are also those, whose sons have been living at the Ashram for some days now.

When we heard this, our plan to go there became clearer and so Ammaji and the Ashram family started preparing food packages. We packed them into the car in the evening and Purnendu, Ramona, Yashendu and some boys went to the flooded area to distribute dinner for these families.

They saw the change and how the water has risen again. Two years ago this part of Vrindavan had been flooded, too, but what they saw today was the double amount of water! There is a boat that brings people from and to their houses because the street that they just crossed two days ago is not passable anymore. The water is too high and flowing with too much force, pressing further into the streets and houses.

Many houses are already filled with water. Where Purnendu and Yashendu could take pictures and film just the day before yesterday, the water was now so high that they had to climb over roofs to have a look at the area.

The families are worried for how long the Yamuna will keep on pouring its water into their homes and for how long the water will be rising. The team of our Ashram distributed about 150 food packages with bread and vegetables in them but of course this is only a small help. We decided to think about how we can help them further and I will let you know about the conclusions tomorrow.

See pictures of today’s food at the Ashram