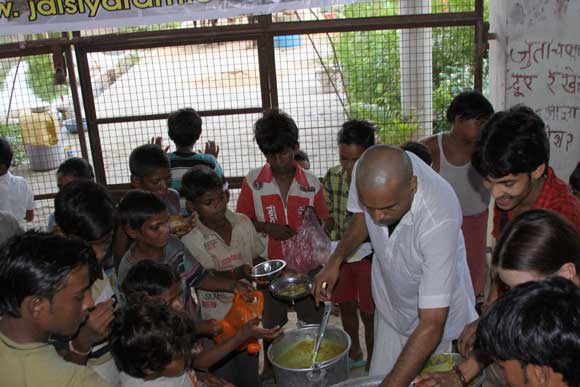 As we had been planning, Purnendu, Yashendu and Ramona went with altogether 20 people and brought big pots, gas for cooking and food to the area where the houses are flooded. We know a man who has an Ashram there and as it has two floors and lies a bit higher, it is one of the few buildings in which the water has not entered yet. This is where the kitchen was set up. They left around two o’clock and came back at six.

When they came back, Ramona told me about the situation there:

“It has become even worse. We had difficulties finding a place to park the car somewhere close to the boat that now takes people to their homes. Where there were cars and rickshaws before, everybody now has to wait until this one boat has unloaded everybody and is empty for them to climb on.

For reaching to our ‘food camp’ we had to walk through knee-high water and people had marked a way with bricks in the water to make it a bit easier to walk. When we reached there, we saw a woman standing in the door and crying. She showed us her house which was standing in the water, big cracks in the walls and already starting to fall apart.

Many people had already gathered in the Ashram with the hope to get food. They had to wait until the vegetables were cooked and the bread was ready but then they all came with pots, plates, bowls, glasses and even plastic bags to fill the food in. We saw that some children came two or three times but who would tell a child of three or four years that it should not ask for more bread? We also know that some people took more so that they can put some food aside for later. They are not sure when they will get the next meal. So we distributed and distributed until the buckets were empty.

On the way back we went by the children’s houses and saw that also there, the situation has become worse. Those rooms which were dry two days ago also have water on the floor now. Sanju, one of the boys, wanted to go home and stay with his mother. But she told him to go back to the Ashram, at this area there are too many mosquitos now and life has become difficult. It was a long day but it is wonderful that we could help!”

We also asked the owner of the Ashram and he agreed on keeping even more families there who need a dry place to sleep.

I want to thank everybody who donated after yesterday’s newsletter and diary! It is only with this help that we could go there today and give these people food! We will publish the donors’ details on a later day, at the moment we are just very busy helping and thinking of ways that we can support those families. And thank you for the mails with best wishes for the children, their families and all people in the area.

I was surprised today that some people who have always been talking about their love to Vrindavan and our school children did not give any sign of compassion. I would have thought to receive a donation from these people first but even if not a donation, then at least a few words telling that they are sending prayers and good wishes. This is a critical time and we would wish to have everybody on our sides with their support, thoughts and blessings.

The senseless Tradition Santhara does not justify Suicide! – 26 Aug 15