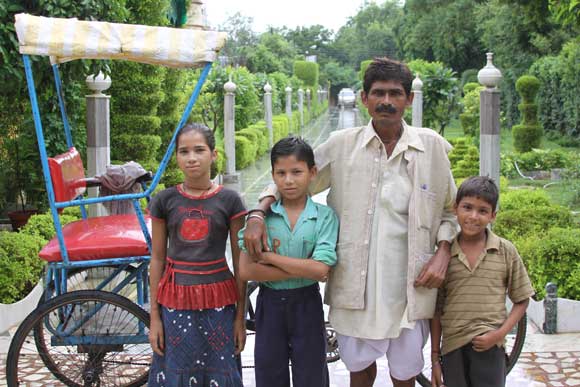 The last days I have been writing about schools in general and our school in particular and as we have a very special school without fees for children, where children get books, uniforms and daily food for free, in which casts do not play a role, in which no child is being hit and everybody is treated equally, I like to describe it. I want to give you a better idea of our school and the children who learn there.
Purnendu told me the story of one of the older girls who joined the school this year. Her name is Rajbai and her and her family’s story moved me so much that I decided to let you read about it, too.

Rajbai is a 13-year-old girl who was born in a village in the countryside, 700 kilometers from Vrindavan. Purnendu met the girl the first time in the end of June when she entered the doors of the Ashram together with her father Roop Singh. He had come to ask Purnendu for work, not only for him, but also for his father-in-law, his sister-in-law, his daughter and his two sons. He added that his sons may still be young, nine and six years old, but they would do whatever they would be told to do.

We got to know that his wife Rukmani died of kidney failure two years ago. When she had fallen ill, they had been told by a doctor that the only way to help her was with an operation. But operations are costly and Roop Singh could not afford it. After her death the situation of the family worsened and he felt the pressure of feeding his three children, his sister-in-law Mira who took care of them when he was at work and his father-in-law Halku, who had difficulties finding work due to his old age. There was nobody else to support him, his brother was just as poor as him and not too long later committed suicide in his despair. That is when they decided to come to Vrindavan and try their luck here.

When Purnendu heard this story, he looked at Rajbai and with a smile he said to Roop Singh ‘I will not let your children work here’. When the worried father wanted to object, Purnendu added ‘They can go to school here. And we will find something for you, your father and your sister-in-law.’ He kept his promise and employed Roop Singh as a Rickshaw driver for those children who live further away from the Ashram, Halku as a warden and Mira as an assistant in the kitchen.

This is how Rajbai and her brothers Rajendra and Narendra are now studying at our school. They eat lunch that their aunt has helped preparing, they see their grand-father taking care of smaller works in school and when they walk home from school they wave good-bye to their classmates some of whom climb into the Rickshaw on which their father is already waiting, ready to take them home.

It is beautiful to see their happy smiles now in their new surrounding, to see how Rajbai laughs with her girlfriends and to know that we are able to help this family find some stability and happiness here in Vrindavan.

Rajbai and her brothers are not the only ones who found help in our school and we wish that all the children whose education we support, will have a bright future based on their time in our school. We know that all of this is only possible with the help of our sponsors and donors and want to thank every of our child sponsors, food sponsors and simply everybody who is connected with our project through good wishes and thoughts for their love and support!

As always I would like to invite you to our Ashram and our school to meet this family, these children and of course many more.