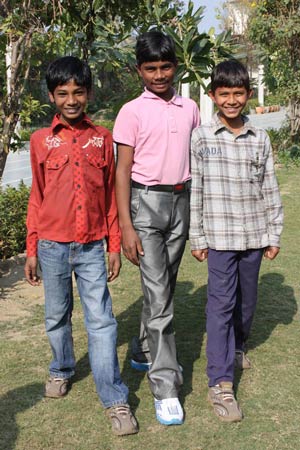 Today a family came to the Ashram. It was an Indian man, his wife, his daughter and his son. Purnendu went out to welcome them and asked them why they had come. He got to know that they were from Mathura and that they had come to leave their children here with us. Purnendu politely denied.

You may wonder now why. Maybe you think these people surely were poor and they wanted us to help them and their children because they could not afford their education. You could believe that they were heartbroken to have to give their children to someone else for that but that they did it to do what is best for their children. Well, it was not quite like that.

The first thing that we got to know was that they came by car. They were well dressed and the children looked as though they were wearing the latest fashion. They told us that they were so busy that they could not properly take care of the children. They did not learn at home and the parents thought they would do better if they lived somewhere else. We should please take both of them into our Ashram and send them to our school.

They were not poor. They were not needy at all. They actually offered us a donation, too, if we would just take their children. We told them that we would not do that and that it would be a better idea for them to put the children in a hostel or boarding school. This is what these institutions are made for.

It is not the first time that this kind of family comes and wants to give us their children to raise. It happened that we once took in a boy without being fully aware of it that his family was not poor at all. We realized that however when his father visited and brought toys along for the child. After he left, the boy did not want to share with the other boys here who felt bad because they did not get cars with batteries and such from their parents. Their parents could not afford toys. That was still okay, we told him to share and just like all other toys at the Ashram, they were then there for everyone. When his father brought him a bicycle however, it was a bit too much and we decided to send the boy back home. From that time on we decided not to give this possibility to children whose parents could afford their raising and schooling themselves.

We are not a hostel. We have the aim to support families who cannot afford the education of their children. We let these children learn at our school for free and if the families are very poor and live maybe even far away, we offer to give those children a place, too. They join our family and become a part of it. They are all equal and the same!