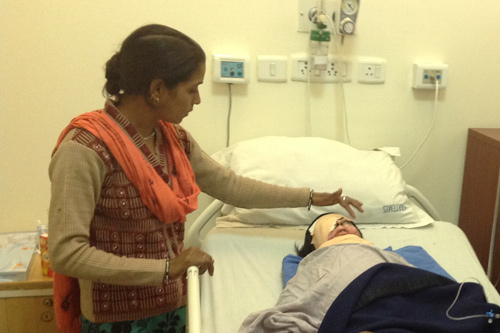 Even after having been at the Ashram for nearly 48 hours, Ramona and I still find that we are thinking a lot about Monika. Not only about how she is right now, after her surgery – to which the answer is fine, according to circumstances – but also her family, the situation around, our experience at the hospital and small details that we talked about since we left her on Saturday. I wanted to share all those impressions with you.

Before we left to Vrindavan on Saturday, we visited Monika. She was awake and doing quite well. She could drink juice and could already mention that the watery soup they had given her had not tasted at all well. I had a conversation with the doctors who had done the surgery. They told that everything had gone well and that Monika would now need to be at the hospital for another few days, so that they can keep an eye on the wounds.

After that, they will need to change the bandage every second day. As it would be very tiring and exhausting for Monika to drive three hours to the hospital and then back home every second day, we are now trying to arrange a room for her and her mother close-by which we can rent for the next two weeks or one month, whatever will be necessary. There, she will be able to recover and just get to the hospital much more easily whenever necessary!

Back here, sitting around the fire and holding our hands over the flames, we sometimes think of Monika’s injury and all the pain she must have had! When she was nervous before the surgery, we told her not to worry – nothing will ever be as bad again as those days which are already lying behind her!

We now stay in touch over phone with Monika’s mother who is there to give Monika company, talk to her, hold her hand and make jokes to keep her at good spirits. The nurses are anyway very friendly and helpful and will take good care of her!

And that is a good thing – because apart from her mother and us, nobody has come to visit Monika or even called! Her family has not come by and even her father, who until now doesn’t even know how Monika’s operation went, whether she is well or not, has not bothered to call. Not one phone call from home. It is hard to imagine but so we have just passed on all the good wishes and wonderful messages of support that friends and helpers sent, to show that there are people out there who care, and care a lot!

It is more than just dropping someone off at the hospital. We could have just sent someone with her and wouldn’t have needed to do it all on our own. But we wanted to. We wanted to be there for them and also for us it was a good experience and is still. When you are with someone in a tragic situation like Monika’s and you are open to help and be there yourself, you get involved with your body, mind and heart!

Now Purnendu, Ramona, Apra and I are preparing to go for a short holiday to Amritsar which we had booked a long time before Monika came back to school. We will relax and enjoy a few days – but of course Monika will be on our mind and we will be in touch. On the way back, on the 2nd January, we will visit her and as the doctors calculated approximately the same time for her to be released from the hospital, we want to take her to her room on that day. I will let you know any news!