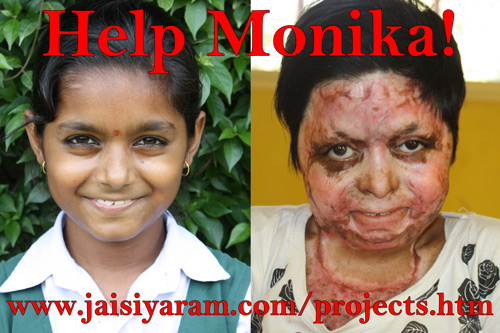 Today I will start a series of blog entries. I want to dedicate this entire week to a girl of our school: Monika.

In the picture above, you can see Monika. On the left, how she looked like before the 4th May 2014 and on the right, a photo of ten days ago, nearly 7 months after her accident.

When Monika did not come to school on 5th May, she was for us just one of several kids who started their summer holidays a few days early. It happens every year with several kids. Little did we know that at that point, Monika was in horrible pain, lying in a hospital bed.

She had been cooking at home on a kerosene stove on which you have to pump oil up for the flame to get bigger. Distracted or in thoughts somewhere else, she pumped too much and too sudden – the oil spurted up through the flame, catching fire and came onto her face, hands and chest, burning skin and flesh.

The family rushed her to a hospital but had to go from Vrindavan to Mathura to Agra and finally up to Delhi before they found doctors who would treat her severe burns! About this time, months in and out of the hospital, I will tell you more tomorrow.

Finally, they came back to Vrindavan. The new school year had started. Of course, teachers noticed that Monika was absent but she was not the only one – every year, some children don’t return to school because they have moved away or started learning in another school. When finally a friend of Monika’s told that she had had an accident, the principal of our school went to her home to find out why she had not come to school until now. He encouraged her to come back to school – and after some time, she finally did. Until the day that Monika was back at school, we had no idea about the extent of this accident!

Upon seeing her, we knew we had to take immediate action. You can see the burns on her face but what you don’t realize on the photo is that she cannot move her neck anymore! In the video below, you can see how much her movement is affected! The skin has tightened and she can only look right and left by moving her whole upper body. Her chin can neither move up nor down. Her arm is in a similar state, as some skin in the armpit was burnt as well. She can only lift her arm about 90 degrees up – no more. All these movements bring her pain!

Monika told us what had happened and that she still had pain in her eyes and on her skin. To soothe that pain, she regularly applies coconut oil. We called her mother to school to talk to her and visited her home to find out more about her living situation. Shaken by what we found out, I already wrote a blog post about her mother, without mentioning any names. We straight away made an appointment with a plastic surgeon in a big hospital close to Delhi – she had not gone to see a doctor for a few months, as her mother could not afford the trip to Delhi and additionally taking time off work. There was nobody else to take her!

On Wednesday last week, we took Monika to the hospital, the Artemis Hospital in Gurgaon. Why we chose this hospital, I will tell you tomorrow. We met the team of three plastic surgeons there and discussed in details what could be done for her.

Monika now needs five surgeries in order to reestablish the functionality of her body. One for each eye – because she cannot close the eyelids anymore, which causes the eyes to dry out and hurt. One for her neck, so that she can move it again. Another one for her mouth, which does not open very far at the moment – just far enough for eating small bites. Finally, the last one for her arm, so that she can move that freely again. For all this, the doctor explained, they would transplant skin of her thigh. Only after that, will they start with using a laser for the burnt skin in the face, on her chest and arms.

It will be a very long process. The doctors told that the surgeries could be combined, so that there would be only three. Still however, there has to be a gap of at least four to five months in between the surgeries so that she can recover! And that’s not it: when she will grow, in the next five to ten years, she will need repeated surgery because her burnt skin cannot grow along anymore! Without the surgeries, she will lose the possibility of several movements in future! On this page you can see the details of the surgery stages which the doctors laid out for Monika as well as the approximate cost of her treatment.

The moment we saw Monika back here at school, we knew that we would help her. The decision was actually taken before and now we just get into the details on how to help.

We have taken our decision to help Monika – and you can support us in doing exactly that! We want to start as soon as it is possible for us to fund her first surgery! Your donation can be an enourmous help!

Here you get more details and all ways to help!

Why do you expect your Children to act different than you? – 9 Feb 14