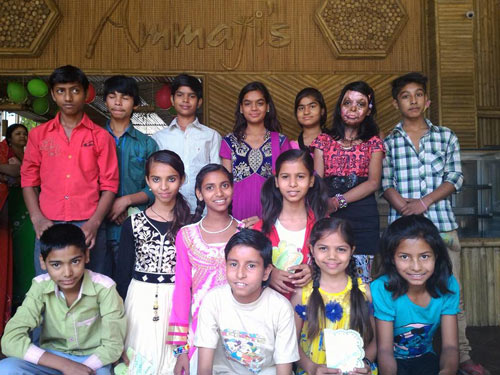 Yesterday I mentioned that Ammaji’s Ayurvedic Restaurant also supports our charity school and when rereading, I remembered that I had not told you about an event we had at the restaurant last week: the farewell party for the children of the 5th class of our school!

Yes, the year has already progressed so far that the end of the school year has arrived and the oldest children of our school, those of the fifth class, have completed their time with us. Exams are over and the day they had their last exam, we invited the fourth and the fifth class over to Ammaji’s for the farewell party.

It is a tradition that the second-oldest students bid the oldest ones farewell. They had hand-made cards for those whose places they will take in the next year, each equipped with a poem and a few personal lines for the fifth-grader. The kids of the fifth class, in turn, had cards prepared for the teachers and Ramona, praising a quality of each and thanking them for their time, effort and love they put in into educating them.

After this exchange, the kids, all in their best clothes, sat down at the tables and had the first fine dining experience of their lives, with our waiters serving them a delicious lunch!

When their meal was over, all there was left to do was to take a picture and then say good-bye – to which we added a reminder and encouragement for the fifth-graders to keep on studying well. And of course we told them that we, as well as their teachers, would always be there for them, whatever questions, problems or needs would arise in future years.

It is always a bittersweet goodbye. Children who have grown in front of our eyes from small kids to young adults. Children of whom we are proud because they have learned so much more than their parents ever have, just in primary school! They have faced odds and will face even more in future but we know that we have given them a base to build on. Basic education which will be the seeds for what they will do in future.

We are looking forward to seeing them in future and finding out where their ways took them!