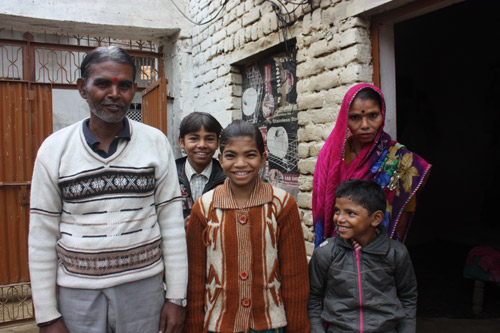 Radha’s parents have both not been to school. The father came to Vrindavan from his birth village in central India about 25 years ago. He was searching for work, as his parents’ field was not enough to provide for him and his three brothers and everyone’s future families! He started as a helper in a kitchen, slowly learned cooking and is now a cook – whenever he finds work as one.

He is not employed as a cook but works in celebrations like weddings or big birthday parties when catering companies or organizing cooks need more cooks to prepare the many dishes. So several cooks of Vrindavan have his number and call him when needed. This means in some months, which are popular for celebrations, he gets more work. During other months, he sits at home and waits for a call. When that call finally comes, he takes along his 16-year-old son as well, who has learned cooking already.

The family of six are renting one room in a house that has three rooms, a courtyard and space for cows. The owners take about 15 US-Dollars per month from each of the families there and additionally ask them to take care of the cows.

When it gets difficult for Radha and Gopal’s father to pay the rent, he takes up other work as well and that can be pretty much anything he can get. Mostly this is just loading bull carts with sand or bricks for construction sites. Of course, also here, his oldest son comes along to earn some extra money.

While his elder brother stopped going to school at the age of 14, Gopal, who is now 13 years old, has other plans: he wants to learn as far as he can. He is right now in the 4th class of our school. Radha, 11 years old, is in the 2nd class. They have another brother who is now 8 years old. Last year, they wanted to bring him for admissions to our school but unfortunately they were late and our smallest class was already full! We told them to be on time for the next year so that he, too, can join our school next year!

Before leaving, we realize that the young brother’s teeth are very bad. We ask whether he brushes his teeth. He answers yes, once a day. We explain that it has to be more often when suddenly Radha adds ‘He eats tobacco, that’s why his teeth look like this!’ We are baffled: so young and already chewing tobacco? Obviously, we had a serious word with the parents about this, telling them to stop poisoning their son immediately!

Radha and Gopal are both good in school. They are quite calm children and concentrate more on their own work than on what others do. While teachers encourage them to be more social and with others, they are also happy with their work, which they both always do very properly!

And this all can only happen because they can go to our school for free. Where otherwise would their father get the money from to pay for their school fees, books and uniforms?

You can help us support children like Radha and Gopal! Sponsor the food for a day or sponsor a child!