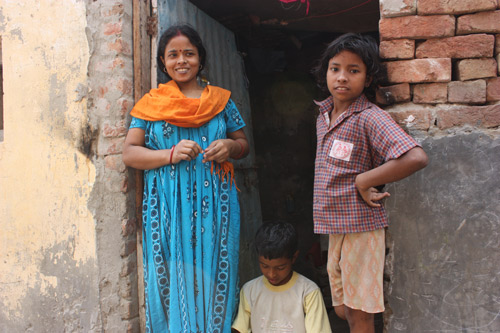 It is Friday once more and I would like to introduce you to two of our school children. They have been at our school since the start of this year, in July – but the family originally had only come to admit one of the two at our school!

We have actually known this family for many years. Their eldest son, Sanju, started at our school in the beginning time of the school and finished the fifth class in the last year. He is now about to be 15 years old. Already at our visit at their home in 2013, the family promised to send the two younger children to school as well but unfortunately they didn’t. At the time of admission this year, Sanju came with his younger brother Sumit, who is now seven years old. Not with his sister Anju, ten years old, who has never been to school before.

Quite obviously, it was not important for the parents to send the girl to school, too. We remembered however that there was a sister, too, and asked them to send her as well. That’s how both younger siblings are at our school now and enjoy learning in the lowest of our classes together.

This family is among the poorest among the children of our school. The father is a rickshaw driver and when he doesn’t get enough rides for bringing people from one place to another, he collects and buys garbage which he can then resell. The mother goes to clean an ashram in the morning and thus earns a little bit herself. They live in their own home but for many years, it has actually been dangerous to be there: every year in monsoon time, the water of the Yamuna rises and enters their home. At the time of floods in 2010, they had to evacuate their home. We helped them in that time and have kept on supporting them ever since.

At our visit this time, we were positively surprised: the family had saved enough money to raise the backside portion of their house and thus create a room into which the water will not come every year! Only if there is severe flooding again, there will be water in their bedroom!

We are very happy that the family was able to improve their living situation at least that far that they don’t have to fear for their complete home every year. Even if the damaged outside wall collapses one day, they still have a safe shelter with the new room!

And in order to support them to save more money and replace the damaged wall as well, we will keep on educating their children completely for free!

Showing off Spirituality and Wealth – 14 Mar 10

Homosexuals – different but not so different at all – 4 May 14

Is your Peace of Mind more important than Property and Money? – 30 Nov 14