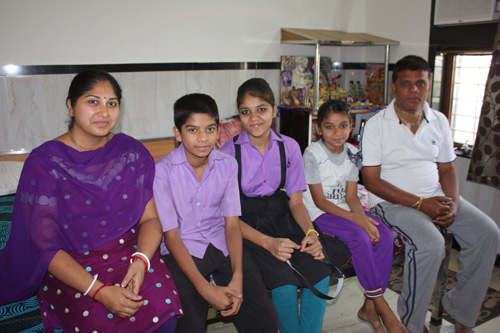 Today I would like to introduce you to three of our students who only joined us last year: Laxmi Priya, Lekhraj and Haladni, 14, 11 and 7 years old. They are different from all our other school children because of one thing: they were not born in India but in Pakistan and have Pakistani passports.

The family came to us last year in July when in fact the admissions had long been closed and the new year’s classes had already started. When we heard of their story however, we didn't hesitate to take them in, knowing that they really needed the support. The family is of Hindu belief but their ancestors decided not to leave the area which is now Pakistan when in 1947 the big country split into two. They remained in the Islamic part, owning a Hindu temple in a small town.

Lekhraj’s parents grew up in that town, got married and had all three children there. When Haladani was born however, tensions in between the two religious groups increased. There were kidnappings, people were attacked on the streets, whole families were tortured for no other reason than being Hindu. The family felt in danger, a violent atmosphere in which they didn't want to raise their children if they had any other choice.

That's how, like many other Pakistani Hindus, the family managed to get a visa for a long-term stay while on a touristic visit to Mumbai. After some years there, they decided to move to Vrindavan, a pilgrim city where they expected to find better jobs due to their religious knowledge and background.

Here, the parents are now helping in a new home for the elderly which has recently opened and is run by a charity. The children's mother cooks for the staff and the people living there while the father does the work of a kind of housekeeper. The family has a big room in the house and are provided food as well.

They get approximately 80 US-Dollar in a month – but they have to save some money every month for their yearly journey to Mumbai in order to renew their visas. That takes quite a bit of money – the train journeys forth and back, a place to stay and food there, the fees for the visas and finally the bribes they are asked for each time in order to get their work done in a month’s time! They never know the exact amount they will need and save the whole year long for this purpose!

In spite of their frequent change of schools, all three children are good at school. Their parents were always trying their best to focus especially on their education! Now in the fifth, fourth and second pre-school classes, they enjoy going to our school.

We love supporting them – and would be happy about your help in that as well! You can sponsor a child or the food for a day to support these children and their education!