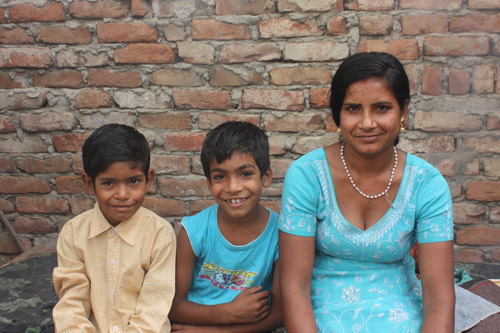 Today I would like to introduce you to three children at once, three siblings who came newly to our school this year. They are Govind, ten years old, Yogesh, who is eight years old and Bhakti who is five years old.

When we reached their home in May, the youngest of the three, Bhakti, was not at home. She had gone to visit her grandparents in Mathura, the next-bigger town. She was there for some days during the summer holidays.

After entering the small property, we find ourselves carefully stepping around the family’s belongings which are quite spread out on the small place. There is an old motorbike covered by clothes, there are pots and buckets and it is wet from the hand pump which is in one corner. On the small area, they have managed to squeeze in a rest room.

This has been their home for many years. Soon after the parents’ marriage the father’s parents decided to help them settle and bought this plot. Bit by bit, they built the rooms, creating a bedroom and a kitchen for the growing family.

The father of the three children runs a small chai shop. It is not so much a shop as it is a wooden box at the side of the road in which he sits and prepares and sells chai the whole day long.

Obviously, there are better days for business, days of celebrations and festivals and of course pilgrimage days. There are other days, when it is very hot or during monsoon time, when he hardly sells enough to cover his expenses.

They try to make ends meet, sometimes having more money to spend on necessities, sometimes less. One of these necessities is of course sending their three children to school! They were more than happy when they got to know that they had come in time to be among those admitted at our school!

Govind was previously in the 4th class of a cheap primary school but when we asked him, he was not even able to spell out his last name. Something similar was true for Yogesh, who had been in 2nd class but struggles even with his first name. This is for us one more proof that they don’t have a lot of money to spend for their children’s education: they could only afford such a cheap school that the children did not really learn what they should!

That’s how Govind is now in our second pre-school class while Yogesh and Bhakti sit together in the first pre-school class. They have a lot of fun there and the family is happy – the burden of paying for primary education has been taken off their shoulders!

You can support us helping children like them! Sponsor a child or the food for a day!