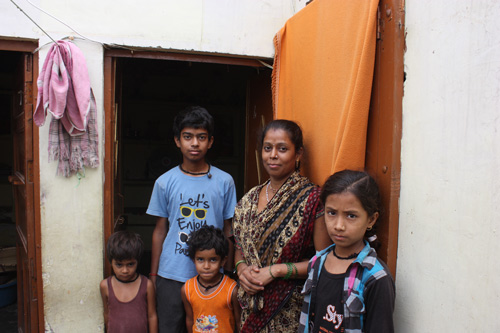 Today I will introduce you to a girl who will have her first day of school in exactly six days when she will walk through our school’s gate on 1st July 2015. Her name is Radhika and she is five years old.

On the way to Radhika’s home, we are gathering a whole crowd of children around us. Some of them are already students at our school, as we are in one of the poorest areas of Vrindavan where a lot of our school’s children have their homes.

It is in this area that Radhika’s father works in a small sweet shop. Radhika’s both parents are originally from Firozabad, a city which is known for its glass work, especially glass bangles. That’s also where Radhika’s father worked before – in a glass factory. In many of those factories however, the working situations are rather dangerous and with all the glass dust and no protection, he was more often ill than at work! Lying ill at home, he realized that he had to move out and find another work! Radhika’s grandparents’ home consisted of only one room and with the growing family, it was getting tight!

That’s how they moved to Vrindavan with their two children, a son and a daughter. They had two more daughters, the youngest of which is Radhika. Her eldest brother, now 13 years old, goes to a cheap private school but for Poonam and Neha, 10 and 7 years old, they didn’t have the money for school fees. They go to a state school close-by. Now however, the family knows that their youngest daughter will get better education completely for free in our school!

They need the support – in the sweet shop, Radhika’s father only earns about 65 US-Dollars per month. For one year now, they have been living in their new home, before that, they had had to pay rent as well. Radhika’s grandparents on both sides had helped the family to buy the property and build their own home. Two rooms and a kitchen on 40 square meters which serves all six of them as living space.

But: they are happy and confident that the future will be good!

If you would like to help children like Radhika, you can sponsor a child or the food for a day – thank you!