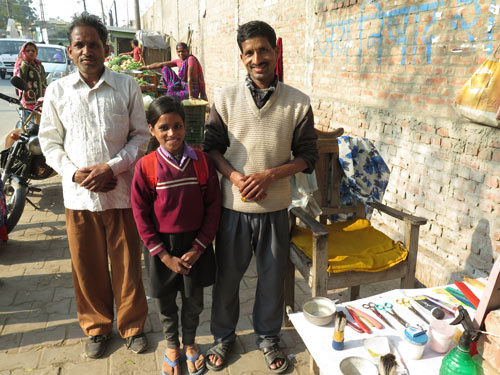 Today I would like to introduce you to a girl of our school who has started her education at our place nearly four years ago. Her name is Mohini, she is ten years old and the oldest of five children.

We have been to Mohini’s home before, when we were visiting Shashi, Krishna and Janki who are living in the same house. It is a house with seven rooms that are currently all rented out to five different parties. One of these parties is Mohini’s family. While the other three girls of our school live upstairs on the roof, Mohini's father and uncle are renting two rooms downstairs. It may be a bit dark but in summertime, this means it is much cooler!

On our previous visit, neither Mohini's mother nor father were at home. This time, too, we didn't meet her mother and we had to go to fetch her father first. That was not difficult though: he is barber and shaves beards and cuts hair about 300 meters up the road of our Ashram. In fact, I believe even some of our male guests may already have enjoyed a shave by him!

Mohini's father and uncle share one barbers’ chair at the side of the road. Their utensils are laid out neatly in front of the chair in a small table with a mirror. On a second glance however one notices that they cannot be the newest: a little bit rusty here and there and combs missing a few teeth.

It is an honest business but doesn't pay very well! We get to know that Mohini's uncle suffers from asthma and is often ill which leaves it up to her father to earn the money for the family. The family includes the two men, Mohini as well as her mother and four younger siblings! With an income of only about 60 US-Dollars and a fourth of that going towards rent, it is often difficult!

This may be one reason why it is so difficult to meet Mohini's mother at home: she is often at her mother or mother-in-law’s home with the children. The grandparents support them by feeding the children and letting them all stay there! In the small room of maybe ten square meters which they have in Vrindavan, there is obviously also less space to play than on the roads of their village!

That’s how Mohini is often alone with her father or, when he is at work and she doesn't want to sit next to him at the road, fully alone at home. It is then that she is happy to have her friends living just above her!

We know that in the next years we will get to know more of Mohini’s siblings as they start coming to our school. It is two more girls who were, just like Monini, born while they were hoping for sons. These two came last. Asking for their age, we don't get a sure answer – as their father is only guessing as well!

We hope that with the base of a good primary education, Mohini can bring a change for her own life and that of her family!

You can support children like Mohini with a child sponsorship or by sponsoring the food for a day!