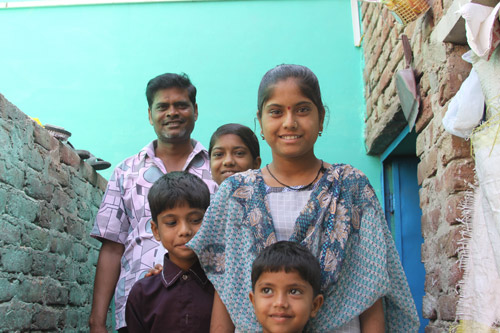 It is time to introduce you to another child of our school and today I will not stop at one: today you will get to know three of our school’s children, two of whom have been at our school for two years and one of whom is very new – but other than normal, the new girl is the eldest of the three!

He says it is her fault. We say it is his and his wife’s. As the parents, they have the responsibility to send their children to school if they want them to learn something and get a better life! That is something a lot of the parents of our school children unfortunately don’t understand!

It is understandable though: they have themselves never been to school! The four children’s father is a security guard and earns about 80 US-Dollars in a month. With 25 Dollars of rent and the normal expenses that you have with four children, he is happy that his wife works as well. She does labour work, daily finding a new job. They never know how much she will make in a month but with this, they get along.

It is not enough for a better living situation though! They live in one room, in a house that has two more rooms, housing another two families like theirs. They all, altogether about 15 people, share one shower, one roof and one small area to dry their wet clothes on a line.

This all can only change in the next generation, if the children get a solid education, learn reading and writing and thus get the chance to have a better job, to have a better income and have more money available. Our school is the base for this – and they would not be able to afford another one!

We are happy that Pushpa has decided to start learning, even if it is quite late, and we hope, she will keep up with it!

If you would like to support children like Pushpa, Poonam and Nikhil, you can do so by sponsoring a child or the food for a day!