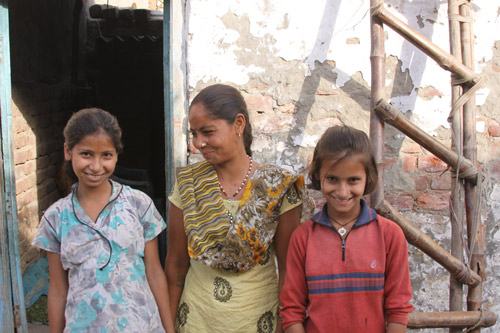 Today I want to introduce you to two girls who have been at our school already for 4 years: Sarita and Kavita. You may have noticed Kavita sometime on pictures of our school children – unlike most of her classmates and fellow students her hair is not of the typically Indian black colour but it is of a light brown. Somewhere in her genes, there is the basic coding for lighter hair.

Apart from that, the two girls are however very similar to their classmates: they like going to school, even if they don’t always show as much enthusiasm for their studies as their teachers would like to see. Kavita, the more ambitious of the two girls, will come to the fourth class now, while Sarita repeated a class and finished the second class in the past year. They talk with their girlfriends and love playing games in their free time. And, like all our school’s children, they are from a family that struggles to make ends meet.

Sarita and Kavita’s father earns money by driving an ox wagon, bringing sand, cement or bricks from warehouses and shops to construction sites. It is daily labour and although he has made connections with several contractors in the past years, he cannot always be sure that there is work: he has to go, inquire and then be there to take the chance. In this way he earns about 80 US-Dollar in a month – sometimes more, sometimes less.

With this money, he feeds himself and his wife as well as his four children. Sarita and Kavita have one elder brother and a younger sister with whom they love to play. They mostly play outside on the road – their home is rather dark and the main room is nearly two meters lower than the street level, as it was built when the road was that low as well.

It is the home of Sarita’s mother’s brother. Her mother tells that she doesn’t have mother and father anymore to support her and that she moved to her unmarried brother after their death. After they passed away, he inherited the whole house – her part was paid to her as dowry at her wedding.

There is the lowest room to which one has to climb down and in which the seven people mostly sleep. Sometimes they move out to the second room which actually only has three walls and a tin roof as well as an opening to the entrance room. This entrance is the space of the ox where it stands overnight, with a feeding trough, grass and hay.

Obviously, the place is a bit smelly and there are lots of flies – but they don’t want to leave the ox outside in fear of it getting stolen. During daytime, when it is not at work with the girls’ father, the ox is brought to an open place outside in the sun.

The mother tells all this with consistent complaints about her bad situation. We also know that she often had fights with her husband and had already considered separation and divorce as well. Although it thus seems a problematic relationship, they are still together.

If you would like to support us in the effort to give children like these a better prospect for the future, you can sponsor a child, the food for a day or give a donation of any amount.

Finding out that I had to undergo surgery – 8 Jul 12

Something Positive in Everything – 17 Apr 08