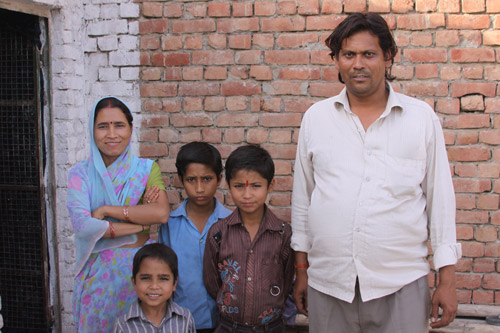 Today I would like to introduce you to two boys who started in our school in this year: Premshankar and Deendayal. They came to Vrindavan after their whole house together with the family’s complete belongings had burned down in their village.

Their father was no stranger to Vrindavan. For the past 20 years, he has been working as a labour in this city while living here alone. He got married and returned to Vrindavan, visiting his wife and later on his children as well from time to time.

Last year, when Premshankar was 10 years old, Deendayal 9 years old and their younger brother, Shyamsunder, was 4 years old, the tragedy happened: the fire to cook on was burning and a spark fell on the straw lying on the floor. Nobody got hurt but they lost their house, their clothes and everything in and around it to the flames.

Only then, when there was nothing left in their village, did the family father decide to take his wife and children with him to the ‘big town’ Vrindavan. A town that he doesn’t deem safe, which is why he decided to give up his daily labour work. Together with his wife, he started a business, running a tea stall on the street, selling handbags by the side.

In this way, he doesn’t need to leave his wife or children alone at home – but they also only earn a maximum of about 50 US-Dollar in a month. Not enough for a family of five to live well. They are renting a room on the first floor of another person’s house, using their toilet, their water pump and walking through their front yard. Their money goes for clothes, food and other necessities of their home. Education would be an extra, something that they would have big difficulties affording for their sons!

Previously, the children went to a government school in their village and Deendayal and Premshankar have already passed several classes. In our school, they passed a test and are now in the 1st class and the upper pre-school class. It shows again that state schools, especially in the village, don’t usually provide quality education!

Now the family is more than happy to have this option, a free school in which their boys can learn and eat without any cost! The teachers tell that they are quite clever, too – so we will be happy to support them through their school time!

If you would like to help these boys or children like them, you can support us by sponsoring a child or the food for a day! The children and we thank you!