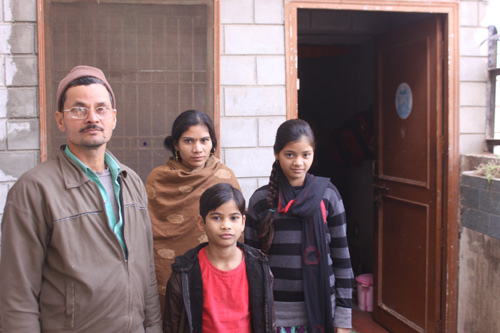 Arriving at their home, we first look at the house and wonder how come they are living in such a nice villa. The reason for that became obvious quite soon: the children, whom we had met outside the home on the road, didn’t walk into the main house but into a room at the side of the house. It is a separate one-room flat with bathroom and toilet. It looks like it was built for servants – and we find out that this is pretty much the situation going on there.

Roshni’s mother works for the family who owns the house. She cleans, cooks, takes care of the old mother and washes clothes. She does practically everything. In exchange, they are allowed to live in the room by the side of the house.

At first, this sounds like a nice arrangement. After a while however you wonder how much they would have to pay for renting such an apartment – and then realize that the woman would probably earn much more than that if she had a regular job! Additionally, she cooks food for the family for the house – but for her own family, she has to buy food separately and cook that afterwards.

This food, their clothes and everything else they need has to be bought from the income of Roshni’s father. He works as electrician, is however not a freelancer but works under a contractor. His income still depends on how much work they get – and when this is less, they just have to make things work!

The family is happy nonetheless. Three years ago they arrived in Vrindavan after they were not able to find any kind of work in their hometown Firozabad anymore. Compared to that, they are now doing quite well. And after having found our school, it is even better for them, as they don’t have to pay school fees and get books and utensils for free, too.

The children however tell about the one thing they like the most at our school: the teachers explain everything nicely and they don’t beat any child!

Do you really prefer a fictional World to real Life? – 18 Sep 14

Do not mind different Opinions among Friends – 17 May 11

Monika after her Surgery – No Visits or Calls of her Father or Family! – 29 Dec 14