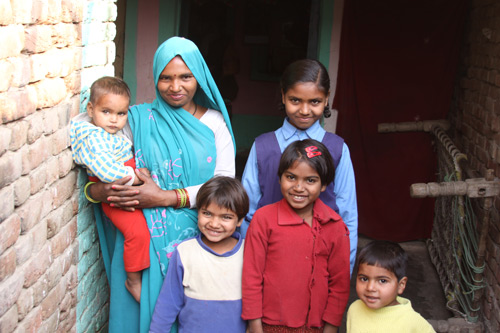 Today I will introduce you once more to a big family. Three of their six children, the eldest three girls, go to our school. Their names are Geeta, Kavita and Rina and they are twelve, nine and seven years old. Their younger sister will be five soon and join our school in the lowest class this year.

In this family you can once more see how much Indian parents want to have sons: they had four girls, with Geeta being the oldest one, before they finally had two boys. Their mother clearly says that they only had so many children because the first four children were girls. They all laugh – the girls are still loved but they get to know from beginning that their brothers were wished for more than they themselves.

It is getting tight in their home with two parents, six children, two female buffalos, one male buffalo and one buffalo calf. Until two years ago they were living in a joint family together with the families of the father’s brothers. Then however fights started in between the family members and they simply separated the complete property in three portions by building walls in between the entrances to the three rooms. Now everyone has one room and a long way towards it. On that way towards the room, Geeta’s family built two shelters for the buffalo family.

The female buffaloes give enough milk for the family’s use but they also eat a whole lot of food which costs the family a good part of the father’s income, who daily goes out with the wagon and the buffalo to earn money by bringing bricks to construction sites. Sometimes he is lucky and can make several trips – sometimes not. The income depends on that and he thus has to search for work every day again.

His wife tells that they usually have just enough for a month’s expenses but sometimes need to borrow money from her husband’s brothers, especially when her husband cannot work enough due to his permanent cough. In childhood, he got something stuck in his throat and apparently it remained there, tissue grew over it and it irritates his throat so that he constantly coughs. At least that’s what doctors told when they examined and declared that they cannot help him, that this should have been treated in his childhood.

All throughout this talk however, the family stays happy and laughing, telling of their hardships like something they have not only accepted but which they can joyfully report of. This is how we know the girls at school as well: always laughing and happy. Teachers tell that they are doing well and that all three of them pay attention in class.

We have seen them all come for food often even during holidays, bringing along the smallest of their siblings as well. The free lunch was one of the reasons why their parents decided to send their children to our school in the first place. So we will feed them, teach them, boys and girls, and thus help this poor family raising their six children.

If you would like to support our work, you can do so with a child sponsorship, sponsoring the food for a day or a donation of any amount.