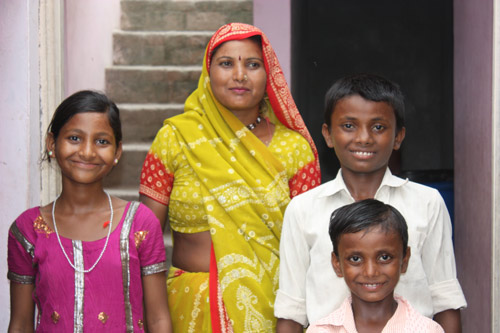 Today I want to introduce you to a new boy at our school: Tinku. He is eight years old and has started learning in the LKG, the Lower Kindergarten – which is like a preschool class in which children learn writing and reading – the basics for going to the Upper Kindergarten and then the first class. We went to visit him at his home and get to know his family.

Many of the children who live in Tinku’s neighbourhood also go to our school, so there we were greeted by a crowd of children who followed us to his home. There we met his mother, his eleven-year-old sister and his twelve-year-old brother.

Tinku’s father was at work. He works at a factory that makes cables – and although his family is happy that he has this job, it does not mean a steady income! He earns 200 Rupees, which is approximately three Dollars, on every day that he works. But he can only work when there is electricity! Without electricity, the factory closes its doors for all workers and nobody gets money.

This may sound strange to someone who lives in a country with constant power supply. In India however, it is not unusual, especially in rural areas, that there are days without power. Fortunately we don’t live in such a place and it is rather rare that there is no electricity for more than a few hours but our Ashram has several batteries to cover the frequent interruptions which are mostly only of short time. A whole factory however has to think if it wants to pay his workers on a day when they can only work half of the time due to power cuts! They may not be able to run their big machines on a battery and so they send their workers home. Tinku’s mother told that especially in summer there are months in which her husband only gets to work on a few days – and only brings home a few days’ money.

It doesn’t matter however how much he earns or doesn’t earn – they have to pay the school fees of their two elder children, have to buy food and clothes and other home expenses and of course their rent of 500 Rupees per month. This is the money their landlord charges for two small rooms and a kitchen – the third room which belongs to the house is not really ready yet, nor are the stairs or the roof. They have a front entry – but no door! Every evening and whenever they leave their home, they have to lock the doors of the rooms separately.

In order to be able to afford the rent and also eat and live, they have to borrow money from their family, like Tinku’s aunt who lives just next to them and whose son also started learning at our school. So while they have a support system with the people who live around them, they are more than happy that they don’t need to pay another child’s school fees!

Tinku is a happy boy and the teachers of the school believe that he will learn quickly in our school. He himself already feels well there. Of course – he has lots of friends, many of whom live close to his home!

It is beautiful to see these children play and learn at our school. If you think so, too, you can support their education by sponsoring a child or the food for a day!