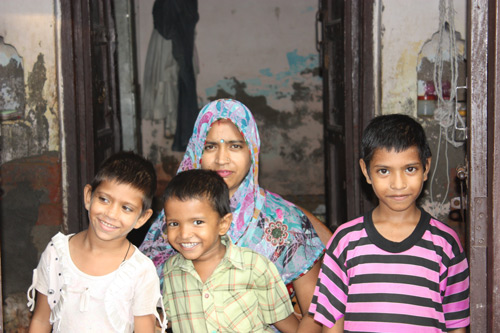 Today I want to introduce you to two sisters who are both students of our school: Kumkum, seven years old, and Radhika, five years old. Kumkum has been at our school for the past three years and after having passed the two pre-school classes, she is now in the first class. Her younger sister Radhika just started going to school and is thus in our lowest class, the LKG.

When we came to their home, Kumkum and Radhika were not even at home. They were playing somewhere close-by in one of the many sandy streets of this poorer area of Vrindavan. There are lots of children in their neighbourhood and everybody knows each other, so their mother doesn’t need to worry about her daughters – they don’t need to go far to find someone to play with and the neighbours will take care of them as well. She also didn’t need to go to fetch them. She simply asked one of the boys running around in front of the house to call them.

So we had a little talk with Kumkum’s and Radhika’s mother. She told us that they had built this house themselves but, as so many others in the area, they had to struggle with money whenever they needed to not only pay back the money but had other expenses as well. The girls’ father is a labourer, working under a mason, his income always depending on the amount of work he got in a month.

She told us that she had another child, a small boy of three years whom her mother-in-law had taken for a walk before we had come. The boy and his sisters are normal, healthy children – but their mother tells us how often she worries about the fact that they just don’t have enough money.

When talk came to the girls’ schooling however, she gave us an open smile and told us that Kumkum had already learned a lot. She is very happy that her girls can study at our school, free of any cost. It takes away the headache of whether they will be able to afford the school books for next year, the uniforms, the school fees, the exam fees, the pens, erasers, sharpeners and so on!

One of the most important things for us is that Kumkum and Radhika both like our school and have a great time there. A lot of the boys and girls who live in their neighbourhood are also at our school and so they anyway have their friends there. On top of it, the teachers tell that both girls are quite good at school, too. They learn, they have success and they have fun. What else can you ask for?

They tell us how much they love playing with their baby brother and Radhika adds: one day, he will come with us to school!

Yes, Radhika, we will be happy to welcome him here!

If you want to support children like Kumkum and Radhika by free education and food, you can sponsor a child or the food for a day. We and all these families will be more than thankful!