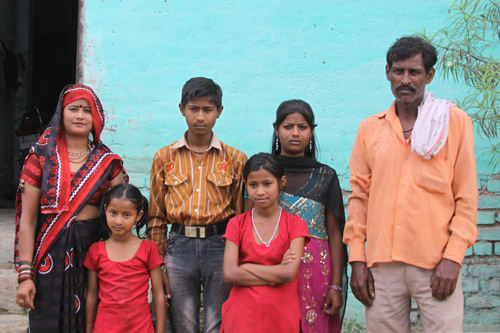 Some months ago, I told you about a girl of our school called Pooja, whose marriage, planned for this year, we were able to prevent. Today I would like to introduce you to the rest of her family, her three siblings who also go to our school and her parents.

Pooja’s two elder sisters are already adult, married and have each two children. Pooja is, with her 15 years, now the eldest child in the home. Then follows Manoj, 14 years, Pinky with 10 years and Tannu, the youngest one with 7 years.

If you have followed my blog entries introducing the children of our school, you probably already see a familiar pattern here: six children and five of them are girls! The parents probably tried to have more sons before and after Manoj. In the end, they have to marry five girls – and for each of them, they need to have money for a dowry and the wedding party which is traditionally paid by the family of the bride.

There was a house, well, at least a part of a house in the family’s possession. The father and his two brothers had inherited that house and it was sold in order to marry the two eldest daughters of the house! As they now already have each two children, they were probably themselves not really past their teenage time! Now, the family has to live for rent.

The father is a labourer, drove rickshaws before and general takes any job that he can get to earn some money for his family. The two rooms that they are renting in a house of another person normally cost about half of his monthly income. The landlords told them that they would have to pay more if they also wanted to use the toilet of the house. They decided to better save the money and go out in the fields! Still however, not much is left for food and clothing, let alone education of four children!

That’s how Pooja, Manoj, Pinky and Tannu are studying in our school. They are in the 6th, 4th and 2nd class and in the second pre-school class. Teachers tell that Pooja is not the fastest to understand but tries hard. Manoj impresses with his good behavior during class while he enjoys making jokes with his friends as well. Pinky and Tannu, the smaller ones, are very lively and teachers say that they learn best in the games and poems that they do with the smaller classes.

We hope we will be able to teach all of them for many further years so that they can learn and create a better future! We will give our best!

You can help us helping them! Sponsor a child or the food for a day and make your contribution!