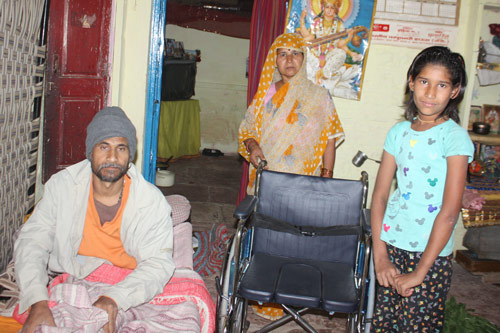 Today I want to tell you about Anuradha, her family and her father, whom we were able to help just a little bit to raise the quality of his life. Anuradha goes to our school, her home is right behind the Ashram and her father is in one of the most difficult situations that I can imagine living with: he is paraplegic.

Suresh, Anuradha's father, was a laborer. From his father he had learned how to lay marble, granite and other stone floors. He has even worked at the Ashram already when in 2005 we lay the pathway of the Ashram.

One year later, in 2006, the big tragedy happened. Anuradha was only 3 years old when her aunt fell ill in Pune, a city about a day's train ride away from Vrindavan. Her father went to see his sister in the hospital. While he was there, knowing that it would take a few weeks before he would come back home, he decided to take an offer for work. In this way he could earn something, too. While working on the outer wall of the third floor of a building, unsecured, as work is done here in India, he grabbed a stone for support which was not fully fixed yet. It came off the wall. He fell, three floors down, landed with the back on the corner of the porch before he hit the floor.

Three days later, he woke up in the hospital, unable to move his legs.

Doctors told him that there was a chance he might even be able to move a bit, enough to go to toilet on his own. For that however, her would have needed to stay at the hospital for two months for treatments – something that he didn’t have the money for. Approximately 810 US-Dollar would have helped him not to be unable to move his legs for the rest of his life.

This is his biggest grief and frustration: after having worked hard to support his sisters’ weddings, having come when one of them was ill and supporting everyone when they were in need, they did not make any effort to get together the money to help him get up out of bed again!

When the family finally came back to Vrindavan, there was nothing that could have been done for his body to work again. All they could do was survive. In that time, we helped them financially. When they married their eldest daughter, we again helped with buying the wedding clothes and some gifts for the new couple. Anuradha’s mother went to work in order to have at least a bit of money for food. The three sons, in their teenage years, joined a religious theatre group, where they could also eat, so that the family had three eaters less. Today, his sons go for religious programs and bring home some money from that.

Finally, in 2010, Anuradha joined our school. We knew that they would not be able to afford her schooling and happily gave her a place. Now she is 11 years old and studies in the 3rd class.

When we visited their home again last week, we did not only come to see her though. We had two presents along with us: a wheelchair for her father to sit in and roll around at home, instead of the bed that he used to be on and a tricycle to move by hand, with which he would be able to drive around outside as well! A donor had asked us how she could help with more than a child sponsorship and this was what we had wished for: to make it possible for Anuradha to take her father outside of their home!

For the past two years he had not left the house – as his previous wheelchair had broken and he couldn’t get out anymore. The house is about three meters below street level with a steep ramp leading up to the main door which we were very careful in climbing. No chance for anybody to carry him up there! Now, with the help of another person, Anuradha’s father can come up, get out and take part in public life again! He can see more than the walls of their two small rooms!

While it is horrible to hear this sad story, it is a good feeling to have done whatever we could. Anuradha was overwhelmed with emotions during our visit, crying and saying that she had never seen her father walk. She stopped however when he told her that at least he was there – it could have been worse!

Isn’t it great to hear such words from a man who has experienced such tragedy?

Anuradha’s father and the whole family were so happy about the gifts! The next day, he came by the Ashram in his new tricycle. It was great to see him out, in sunlight and moving by himself!

We want to give more such support to those in need! You can help us, too! You can sponsor a food for a day or take a child sponsorship – or make a free donation! We and these children thank you from our hearts!