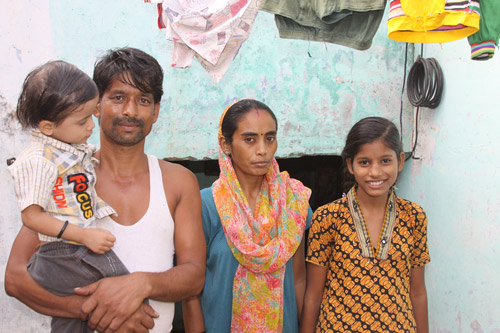 Like every Friday, I want to introduce you to another child of our school today: Aarti, an eleven-year-old girl who is now in the 2nd class of our school.

When we came to Aarti’s home, she was at the small shop across the road, buying a snack for her little sister who is three years old. We went home together with her and met her mother and father as well. Only her elder brother, thirteen years old, was not at home.

Aarti’s parents told that they were originally from Uttarakhand, an Indian state in the Himalayas and moved to Agra a long time ago for better work chances for the father, who does labour on construction sites and wherever else needed. They didn’t manage to settle well in Agra either and when a friend told that they might have better possibilities in Vrindavan, where a lot of development was taking place ten years ago, they moved here.

There was work but there were also two small children to raise and some years later a third one followed. Today Aarti’s father earns about 4000 rupees a month, about 50 Euro, if there is work for the whole month. Sometimes there isn’t. The family manages by saving in months when they have some more money for those when they have a bit less. It is just enough for them to be able to visit their families in Uttarakhand approximately every three years.

All five of them live together in one rented room in a house which has been built when the plots were still very low. You now have to step down to their room and next to them their landlords are living. They obviously had wanted to build some more rooms and toilets closer to the front of the property but stopped in the middle of the work. It looks like they all are living on an abandoned construction site.

One day, the mother tells us, times will be better and we will have another room or maybe our own house. Maybe.

Aarti has been at our school for four years. She is not a very good student but also not a bad one. She has fun with her friends, enjoys chatting with them so much that she sometimes doesn’t notice the teacher coming in. She does an honest effort however and when she pays attention, the success shows itself as well! We are happy to see this – it is the fruit of our support to this family and this girl’s future!

You can help us giving children like this girl education and food completely for free! Take a child sponsorship, sponsor the food for a day for the children or simply make a donation of any amount – whatever you decide to do, it will support these children and their future!