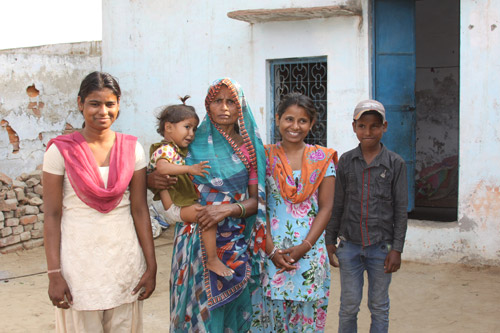 Today I would like to introduce you to Deendayal, a ten-year-old boy of our school. He is the youngest of six children and has been in the 1st class of our school in the past year.

When we came to Deendayal’s home, a little girl was playing in the courtyard and his elder sister was at home. Quickly however, he called his mother and second sister so that we could have a talk. Deendayal’s mother told us that the little girl was her granddaughter, the daughter of her eldest son. She has two daughters and four sons, the youngest of whom is Deendayal. Two of her sons and one of her daughters do private studies and go to give their exams to a school in Haryana, where their grandmother lives. Only Deendayal currently goes to school daily.

Deendayal’s father is a labourer. He works on fields, sowing or harvesting the crop of other people. For this work, he gets paid on a daily basis but also can take grains home for his family. In times of harvest, there is a lot of work and he can earn up to 170 US-Dollar in a month. Then there are other months however, when the seeds are out on the fields and just have to grow, without any work needed. In those months, he does not earn money.

Deendayal’s mother makes the picture clear: when there is money, we buy vegetables and eat our chapatis with that. When there is no money, we eat them with salt.

Even when there is no work on the fields however, they don’t earn nothing at all, thanks to their buffalo cow. It gives about five liters of milk in a day – and that can be sold. So they never know exactly how much money will be available but they normally can manage – even when all six children plus a daughter-in-law and one grandchild are at home.

Their home is inherited and has four rooms and a kitchen. It is quite spacious, compared to many of our other school children’s homes, with a big space where the buffalo cow is eating and the kids can play. It is however still very simple, many walls are not plastered and on some walls, they have simply painted white on the bricks. But it is theirs.

Deendayal is not the most eager student. He tells that he doesn’t learn much at home – and his teachers obviously notice that. In class however they see him giving his best. Education will open him the doors to a better future and we will do every effort to help him improve in school.

How Technology has changed my travelling Life – 24 Aug 12