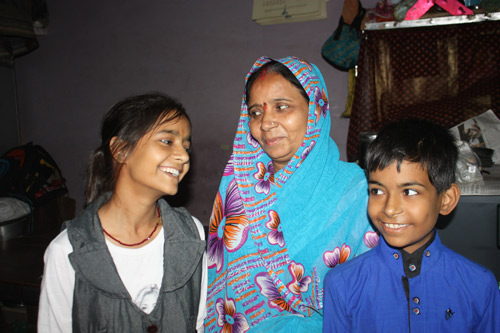 Today I would like to introduce you to a boy who has been at our school for three years. His name is Ishu, he is eleven years old and the youngest of three children.

Ishu’s home looks like a big house at first. The entrance door opens to a hall which has several doors to rooms. But only one of these rooms belongs to Ishu and his family! The other ones are rented by Ishu’s uncles. The kitchen is shared by everyone.

Ishu does lives somehow in a joint family but in another way also not: each of the families has a separate pocket for money, they all cook and eat separately – but they live together in this house. Each family’s father has followed the family tradition and has become barber. They all have their tiny salons in the same street.

They earn money – but raising three children, paying rent and everything else that is necessary also costs money! That’s how their eldest son, who is now studying for a bachelor’s degree, is doing embroidery work for clothes of deities in order to finance his studies. Ishu’s sister, the middle child, is now in the seventh class and Ishu, the youngest, goes to the first class of our school.

He has been at our school for the past three years, starting in our pre-school class, and is enjoying it very much there. He has friends – also apart from his cousins who go to our school, too.

For the family, it is a big support not to have to pay Ishu’s school fees. In our school he doesn’t only get food, books, pencils and all other stationery but also the education he will need to later on earn some more in life and get a more stable income than the other men in his family.

You can support children like Ishu with a child sponsorship or by sponsoring the food for a day.